The cornerstone of Republican presidential hopeful Donald Trump’s campaign has been the issue of immigration, which according to polls, many Americans believe is one of the foremost problems facing the U.S. in 2016. But there’s nothing quite like leading a country caught in the midst of the greatest refugee crisis since World War II.

Such is the case of Hungarian Prime Minister Viktor Orban, who has watched as swarms of asylum seekers have poured across Europe, arriving from the Middle East and Africa and wreaking havoc upon the countries which — almost in a suicidal fashion —  have taken them in despite myriad red flags, including an inability to adequately vet the migrants.

Last September, when Orban recognized that the situation along the Balkan route to Germany was getting out of control, he ordered that a 100 mile long, 12-foot high razor wire fence be built on the country’s border with Serbia. When refugees revolted, he sent law enforcement in to preserve the wall and keep the migrant flow out.

Since the border security was put into place, this is the effect it has had on refugees invading Hungary. 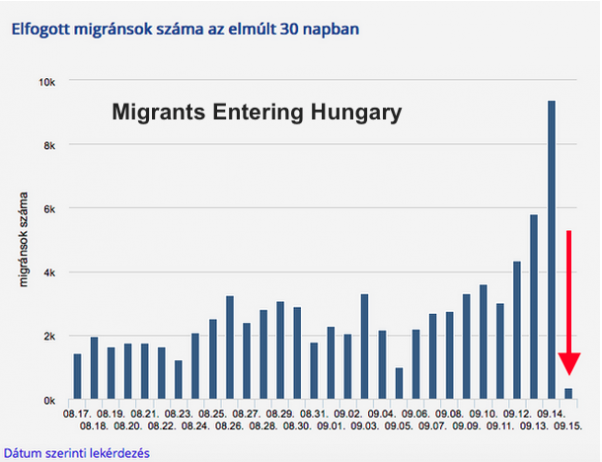 While Orban was widely criticized as a “racist” and “xenophobe” for his tough stance on the influx of refugees, he refused to back down. He and his fellow Central European neighbors had — until very recently — lived under the yoke of Soviet oppression and were the last region in Europe controlled by the Muslim Ottoman Empire. Unlike his Western European counterparts, Orban was unfazed and stood steadfast in his resolve to keep Hungary free from what he saw as invading masses which would change his nation forever.

On Wednesday, Orban took it up a notch further and called for a referendum on migrant quotas, saying that it “would be a major test of European democracy,” and that “the migrant quotas would redraw the ethnic, cultural and religious map of Hungary and Europe.” He added:

“Nobody has asked the European people so far whether they support, accept, or reject the mandatory migrant quotas. The government is responding to public sentiment now: we Hungarians think introducing resettlement quotas for migrants without the backing of the people equals an abuse of power.”

Indeed, most of the power structure in the European Union exists within an elite crowd behind closed doors that is completely separated from the will of the average citizen, many of whom are revolting against the influx of migrants who are tearing their nations apart, both economically and from a security standpoint.

“To us this is a fundamental, unavoidable, essential question of Hungarian politics: can anyone else decide for Hungarians who we Hungarians should or should not live with?” the PM asked.

Other countries are finally reacting to the crisis as well. Norway just announced that it will vote on legislation to abandon the Geneva Convention and secure its border with Sweden should the migrants collapse the Swedish system. Belgium is setting up border checks with France for fear that the clearing of the infamous Calais migrant camp could precipitate refugee flows into the country.

Many nations that are part of the Schengen agreement which allows freedom of movement within the European Union are also rethinking their policies. Germany, Austria, Denmark, Sweden, and France have reimposed border controls to thwart the unrelenting swarm of refugees.

It appears that Orban’s approach — initially derided as “xenophobic” — is being adopted by other European nations. The question remains whether it is now too late to save Europe.