While Marissa Jenae Johnson, co-founder of the race-baiting, anti-cop group, Black Lives Matter (BLM), opines ad nauseum about the indignity of being black in America 2016 and demands that whites must “give something up”, one need only look at the deplorable conditions that exists for many whites in the country of South Africa today to see the unintended consequences of policies which institutionalize reverse-racism.

Johnson has been at the forefront of the often violent BLM movement that has caused rioting across the U.S. in the aftermath of perceived police misconduct directed at African-Americans. Despite years of liberal policies that have created a culture in which 73% of black babies are born out of wedlock, remain mired in poverty and stuck in a generational cycle of government dependence, some in the community are still asking for MORE from whites to atone for the sins of men long dead.

But what exactly do these agitators want? According to Johnson, they don’t want the socialism that Bernie Sanders is peddling, and neither does Hillary Clinton or the Democrat party do the trick. Affirmative acton apparently isn’t enough, nor are generous welfare benefits or free healthcare and housing.

In the interview below, Johnson states, “What it’s going to take to dismantle white supremacy is white folks actually gotta give up something. You have to give up the things that you currently benefit from.”

So let’s take a look at South Africa, a country which saw a “rainbow” revolution when Apartheid ended in 1994. While most white South Africans still enjoy relative wealth, the number of poor whites has steadily increased since then as the ruling African National Congress (ANC) introduced laws that handed jobs to blacks and aimed to give them a greater piece of the pie. Today, 90% of government jobs in S.A. go to blacks, far above their proportion of the population.

“Post-apartheid” South Africa has gone from promoting racial equality to segregation and exile. Though the ANC promised to undo years of oppression and restore integration, it has gone from one extreme to another, promoting blacks over whites, regardless of skill or education. Skilled whites have left the country in droves.

The current ruling class institutes policies which are effectively affirmative action on steroids, resulting in rampant government corruption, an unemployment rate of at least 25%, unprecedented rates of murder, rapes and cases of HIV and a lower life expectancy. Communism is also taking a strong foothold.

Many white South Africans have fallen into extreme poverty and are forced to live in squalid shanty-towns with makeshift homes and outside toilets, surviving on less than $45 per month. 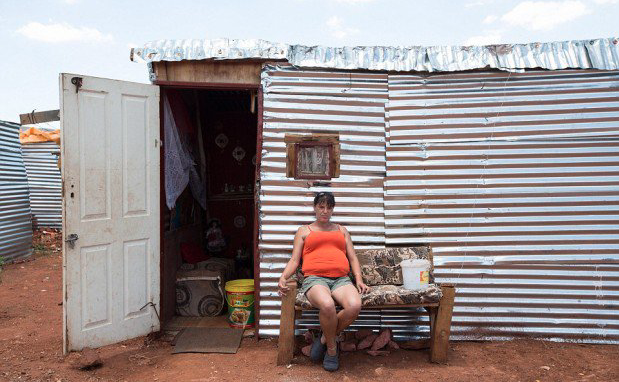 Due to the brutal regime under which black South Africans once lived, these poor whites — mostly working class Afrikaners — receive little sympathy from people who believe that they should pay for the sins of their fathers.

According to Daily Mail, more than 400,000 white South Africans live in extreme poverty. There are reportedly about 80 white squatter camps across the country, many situated on old dumping grounds with no running water, no facilities, and little food. Hospitals refuse resident’s care and the squatters are have little to no chance of finding employment.

Is this what the BLM movement in America seeks?  To take vengeance for the horror of slavery committed by the 1.4% of white Americans who owned slaves well over one hundred years ago? To create a culture in which everyone lives more equally in misery? That is not the pursuit of liberty; that is simply changing the face of racism, which by any measure should be considered the enemy.