Take the Poll Below 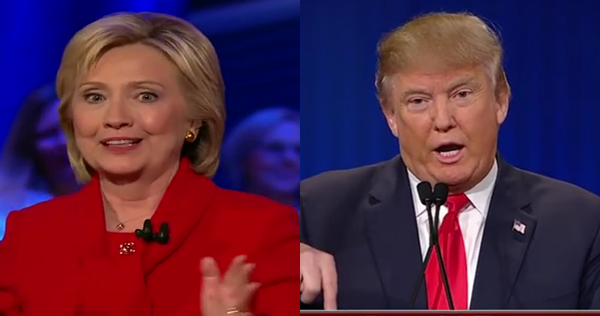 On the day before the Super Tuesday primary vote a new CNN/ORC poll shows very comfortable leads for both Republican Donald Trump and Democrat Hillary Clinton.

Clinton has slightly increased her margin by 3 points over Sanders in the past month and is now receiving 55 percent of Democratic support to Sanders’ 38 percent for a 17 point lead.

Trump has increased his support in the past month from 41 percent to 49 percent in the current poll, which affords him a 33 point lead over the second place candidate, Senator Marco Rubio.

Senator Rubio received 16 percent of the vote to barely out poll Senator Ted Cruz who received 15 percent. Cruz’s support dropped four points in the past month, sliding him from second to third place in the race. Rubio’s support doubled in the same time frame.

Trump outscored his competitors in the following categories: effective at solving the country’s problems (51 percent); being a responsible commander-in-chief (48 percent); ‘best understand[ing] the problems facing people like you’ (46 percent); and being the most honest and trustworthy (35 percent.)

In the same categories, Clinton beat Sanders in two, tied one and lost one. Clinton prevailed in the commander-in-chief test (73 percent); and effective at solving the country’s problems (63 percent.)

It’s nearly a tie on the question, ‘best understands the problems facing people like you’ with Clinton receiving 49 percent and Sanders 48 percent.

Sanders beats Clinton at being the most honest and trustworthy, 59 percent to 36 percent.

Clinton has a higher percentage of Democrats than Sanders who declare they wouldn’t support her, but her numbers aren’t near as potentially damaging as Trump’s.

If the two front runners do end up facing off in the general election, their respective high negativity ratings could become critical to deciding the next occupant in the White House. Their ardent, if not fanatical, supporters should be wary of over-confidence.