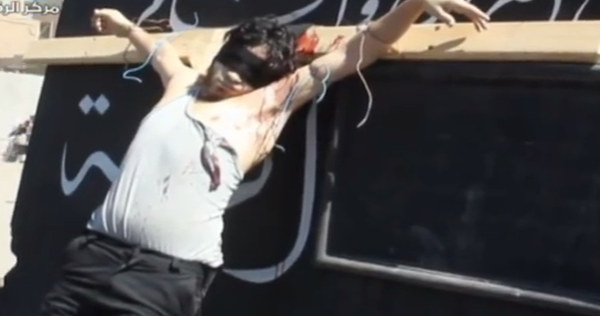 One Tunisian and two Algerian militant ISIS members were publicly executed in the eastern Syrian province of Deir ez-Zor.

The two were allegedly charged with corruption in the city of al-Mayadeen.

“The dead bodies of the three jihadis were crucified near the al-Baloum square in central al-Mayadeen on Monday evening,” said Anass Jabir, a rights activist.

Jabir said the an ISIS Sharia official read a statement accusing the three foreign jihadis of “robbery” before the execution was carried. The men were crucified and then shot at point blank range in the back of the head.

“The Sharia Court convicted the three militants of corruption for receiving bribes from local people in al-Mayadeen,” said the source.

“The ISIS-lined Sharia Court insisted that the bodies of the three militants will remain crucified for three days, in a bid to terrorize its members,” the source continued.

The three men, who were affiliated with ISIS-led Islamic Police in the city, were discovered to be exploiting their official positions for personal interests.