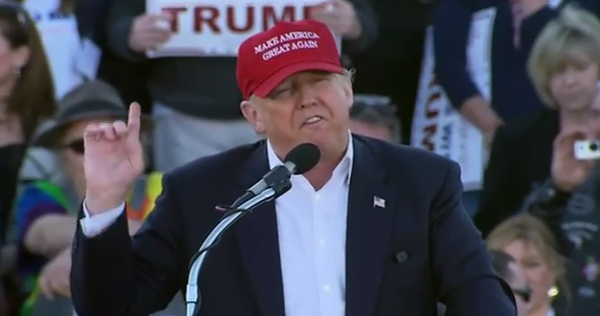 There are 595 delegates at stake across eleven states in the Republican contest on Super Tuesday – nearly half the total required to secure the party’s nomination.

Since the Republican debate only four days ago, the candidates have maintained a blistering pace with Trump striving to “put this thing away” while the rest of the pack struggles to avoid choking on his dust.

In the last four days, Trump has made seven major campaign stops.

Senator Marco Rubio has kept apace with campaign stops, but suffered the inconvenience of losing his voice and had to call on South Carolina Governor Nikki Haley to speak for him in Atlanta.

Both Senators Rubio and Cruz have maintained their attacks on Trump, blasting his business record, his character, his physical attributes and inconsistent history with conservative principles. Rubio vowed to ratchet back the rhetoric and insults.

The effectiveness of the Rubio/Cruz attacks may be measured against the fact that Trump has only increased his lead as they’ve been wailing against him. Read verification here.

In Alcoa, Tennessee, Senator Rubio said, “Unfortunately today, there are a significant number of our fellow Americans in the Republican Party who have chosen, at least for the moment, to support someone who appeals to their fears and anxieties. And they have a right to be fearful and anxious. But what no one has a right to do is take advantage of that, to carry out the most extensive con job in American political history.”

That statement alone ought to be sufficient grounds to disqualify Rubio.

Doesn’t he know: the most extensive CON job in American political history is the CON perpetrated by CONgress, especially the Republican majority CONgress, which has completely ignored the will of the voters who gave them their majority in both the House and the Senate in 2014. Apparently, he doesn’t.

Cruz, like Rubio, is stuck so deep in the forest he can’t see the trees.

He flails futilely at Trump by saying, “You don’t get to abuse and take advantage of American workers and suddenly style yourself a champion of American workers” while the very workers he thinks he’s defending against Trump rally to Trump in droves.

These Senators do not seem able to read voter sentiment very well.