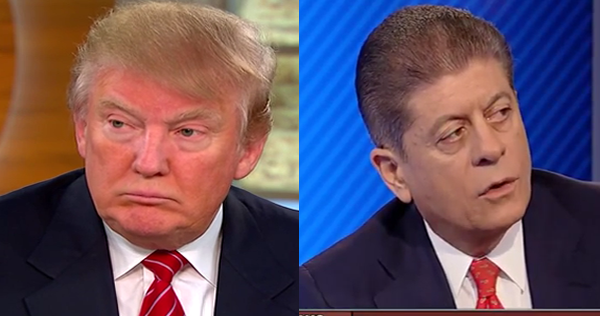 Critics have alleged that a President Donald Trump might appoint a rabid leftist to the Supreme Court, like his left-leaning sister in New York.

However, Roger Stone offered insight as to who Trump, if he became president, might choose to fill Antonin Scalia’s seat on the bench – the tough-minded, high profile, rock solid on civil liberties conservative, Judge Andrew Napolitano.

Even though he semi-regularly appears on Fox News, Napolitano is not known to be an establishment favorite. More the contrary.

He is known for disagreeing with conservatives on questions of personal freedom, national security and equality, emphasizing minimal state involvement and the preservation of personal liberty. His is a Princeton and Notre Dame Law School graduate. He resigned from his judgeship in 1995 for private practice. He has pursued a writing, teaching and television career, and recently renewed an endeavor to developing his natural law jurisprudence.

A Napolitano appointment to the Supreme Court would be as unconventional and outside-the-box as a Trump presidency would likely be.

Would you support the Trump appointment of a tough conservative like Judge Andrew Napolitano to the Supreme Court?