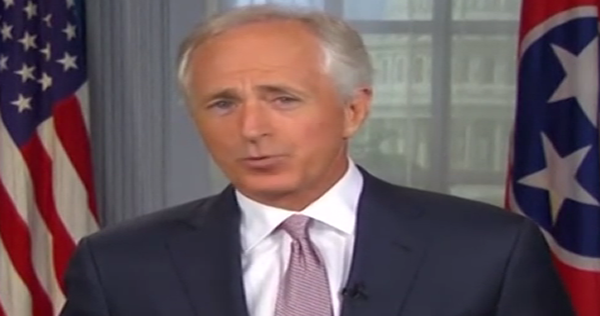 Tennessee Republican Senator Bob Corker issued what can only be interpreted as a slap on the face of the Republican establishment, although they’re likely too dull to recognize it.

Corker provided his assessment: “What’s happening in the Republican primary is the result of two things: the fecklessness and ineptness of the Washington establishment in failing to address the big issues facing our country and years of anger with the overreach of the Obama administration.”

The Senator urged Republican leaders to “focus more on listening to the American people and less on trying to stifle their voice.”

As the party establishment flails desperately in an attempt to stifle the insurgent candidacy of Donald Trump, who couldn’t have predicted it would come to this?

Once upon a time in America, the elected served the electorate. They didn’t endeavor solely to preserve their positions of privilege and power. They went and did the people’s bidding.

The Republican Party forgot that. Or perhaps it chose to ignore that. It has failed to read the writing on the wall, which has been moving from the periphery in 2009 with the formation of the Tea Party, to the center today with a majority of the party now willing to follow a populist rogue more because he has the chutzpah to wave his middle finger to the establishment than because he is consistently aligned with their conservative principles.

It’s sad to witness the Party of Lincoln go out like this. But when a party forgets who’s boss, they deserve no less.