The clash of the titans just ratcheted up a notch as Republican candidate  Donald Trump and Pope Francis continued their increasingly testy exchange over the issue of illegal immigration in the United States. The war of words between the billionaire businessman and head of the Holy Roman Catholic Church has reverberated across the globe, but the question remains, “which side will the American electorate side with in the 2016 race for the White House?”

The Pontiff has excoriated the Mexican and other central American governments for creating the “humanitarian crisis” which has led millions of migrants to flee to the United States. But he equally chastised Americans for their nonchalance regarding the plight of poverty stricken people seeking a better life in the U.S..

But even before the Papal visit, Trump minced no words in his messaging to the the Pontiff,  saying that he “doesn’t get it.”

The billionaire businessman suggested that Francis was serving as a pawn of the Mexican government, stating, “I think that the pope is a very political person.”

During an interview with Fox News, Trump said that Mexico most likely directed the pope to pay a visit to the border out of concern that the United States would get tougher on migrants.

“I don’t think he understands the danger of the open border that we have with Mexico,” Trump said of Francis. “I think Mexico got him to do it because they want to keep the border just the way it is. They’re making a fortune, and we’re losing.”

In the latest clash, Francis stated on Thursday that Trump “is not a Christian” if he calls for the deportation of illegal immigrants and pledges to build a wall between the United States and Mexico.

It didn’t take long for Trump to respond with a dire warning:

“If and when the Vatican is attacked by ISIS, which as everyone knows is ISIS’s ultimate trophy, I can promise you that the Pope would have only wished and prayed that Donald Trump would have been President because this would not have happened. ISIS would have been eradicated unlike what is happening now with our all talk, no action politicians.”

“The Mexican government and its leadership has made many disparaging remarks about me to the Pope, because they want to continue to rip off the United States, both on trade and at the border, and they understand I am totally wise to them. The Pope only heard one side of the story – he didn’t see the crime, the drug trafficking and the negative economic impact the current policies have on the United States. He doesn’t see how Mexican leadership is outsmarting President Obama and our leadership in every aspect of negotiation.”

Pope Francis — the first South American Pontiff — has long been a social justice warrior and advocate for the poor. He has encouraged countries in Europe and North America to take in millions of international migrants — many of whom have wreaked havoc in their new nations, from both a financial and criminal standpoint. Trump, however, has been die-hard supporter of border security and immigration control, kicking off his presidential bid with a tirade about the “rapists” and “killers” illegally infiltrating the United States from Mexico and other countries.

Trump also stated that it was “disgraceful” for the Pope to question his faith.

While the effect of the back and forth between Pope Francis and Trump on the 2016 election remains unknown at this point, one thing remains clear– while Democrats embrace Francis’ liberal stance on environmental and immigration issues, Republicans remain far more skeptical of their approval of the socialist Argentinian. 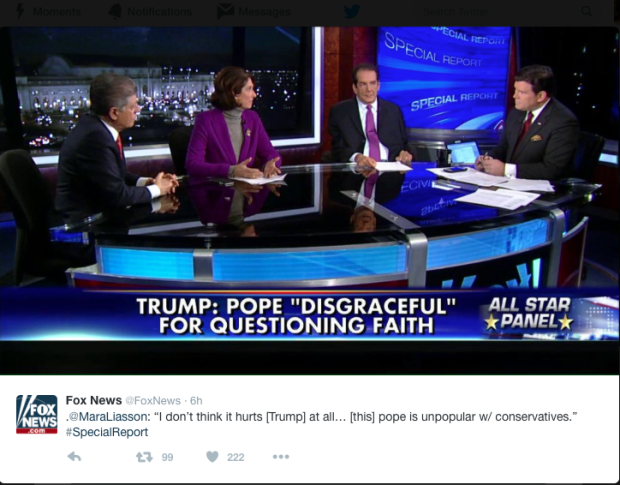