Iconic rock musician and conservative activist Ted Nugent is no stranger to controversy. He has often found himself deep in political discord, like when was caught in the fray after posting a message on Facebook displaying photos of anti-gun Jewish politicians and community leaders.

Accompanying the photo grid he wrote:

“Know these punks. They hate freedom, they hate good over evil, they would deny us the basic human right to self defense & to KEEP & BEAR ARMS while many of them have tax paid hired ARMED security!” 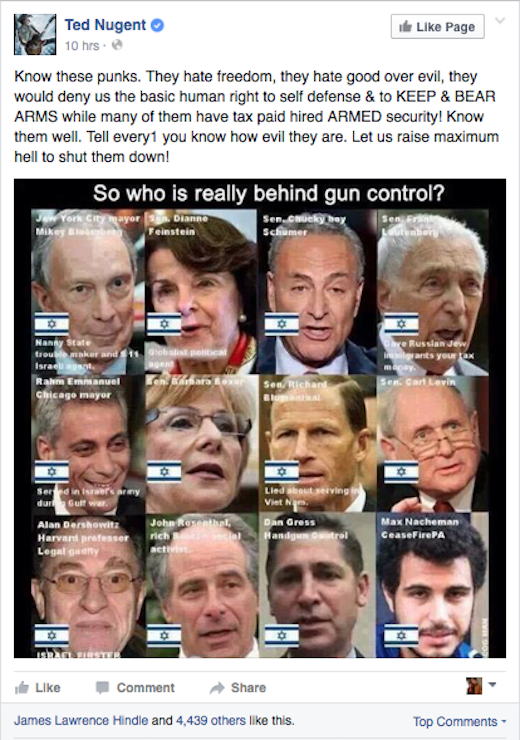 Beside each portrait is an Israeli flag to slam home the fact that each of the gun-grabbers pictured is Jewish. The Anti-Defamation League (ADL) immediately condemned Nugent’s post, with CEO Jonathan A. Greenblatt calling for him to take it down.

Greenblatt stated that “making the outrageous suggestion that Jews are behind gun control, is nothing short of conspiratorial anti-Semitism. Regardless of one’s views on gun control, this kind of scapegoating of an entire religious group is completely unacceptable and completely divorced from reality.”

Left-leaning websites and social media followers also hopped on the anti-Semitism band-wagon, with some Twitter followers stating that they had hoped Nugent was dead when they saw his name trending on the popular social media site.

The sixty-eight year old rocker is noted for conservative political views, his lifelong stance against drug and alcohol abuse and — as a board member of the National Rifle Association — is an ardent advocate of hunting and gun ownership rights.

While Nugent’s post has been denounced, the facts he presents are indeed true. For the past one hundred years, Jews have overwhelmingly voted Democrat in American elections. Moreover, the evidence is incontrovertible that Democrats favor stricter gun control laws while Republicans are strong proponents of American’s right to keep and bear arms. The liberal Jewish leaders presented by Nugent, indeed, have all favored limiting gun rights.

As for the anti-Semitism claim, it might behoove all who protest Nugent’s social media post to focus their angst on the soon-to-be former President Obama, who signed into law the nuclear accord with Iran which was widely condemned by Israeli Prime Minister Benjamin Netanyahu as a horrific mistake of historical proportions. While Iran has continued to state its intention to annihilate Israel, there has been nary a peep from the American liberal Jewish community denouncing the existential threat posed to Israel by Obama’s nuclear deal with the world’s largest state sponsor of terror.