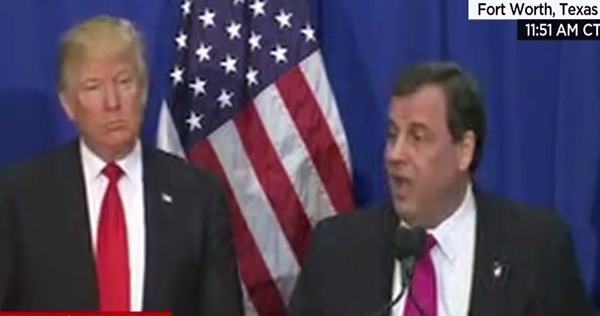 Former presidential candidate, the current governor for New Jersey Chris Christie, stepped up to the microphone and endorsed Donald Trump for President of the United States, adding that he would help in every way he could for Donald.

After leaving the campaign, Christie said he went through a process to decompress from the rigors of the campaign trail.

Spoke with wife and family to decide if they wanted to distance themselves from the political process of the presidential race or remain engaged in getting America back on the right track. Christie decided to endorse his friend because as he thought about it, Trump was the best and only choice.

Christie said Trump and Governor Kasich are the only people remaining on the debate stage with tough executive decision making experience. He said there was no one better than Donald Trump at writing budgets and staying profitable.

Christie emphasized that Trump is not just another politician, with one term of Senatorial experience. He endorsed his New Yorker friend saying:

“I’m proud to be here to endorse Donald Trump for President of the United States. I’m doing this for a number of reasons. Donald and I, along with Melania and Mary Pat, have been friends for over a decade. Secondly, I’ve been on that stage and I’ve gotten to know all the people on that stage. And there is no one who is better prepared to provide America with the strong leadership that it needs, both at home and around the world, than Donald Trump.

He is, looking at the five people on that stage last night, the clear stand out, and the person who will do exactly what needs to be done to make America the leader around the world again.

There is no doubt in my mind, and I’ve been saying this right from the time I entered the campaign, that the single most important thing for the Republican Party is to nominate the person who gives us the best chance to beat Hillary Clinton. I can guarantee you that the one person Bill and Hillary Clinton do not want to see on that stage come next September is Donald Trump.

What Donald Trump is about, is about the people of this country.”

He berated Senator Marco Rubio for taking desperate measures in a desperate campaign, not talking about the people of the country.

“When are we going to start talking about the people of this country. The fact that middle class folks are suffering. The fact that people who want jobs can’t get them because they’ve been taken away. The fact that we can’t, as a country, stand up and defend ourselves around the world because we have a leader who wrings his hands. And I didn’t hear any of that this morning from Senator Rubio.”

Christie reiterated that he felt the top priority for the Republican Party was to keep Hillary Clinton “from getting within ten miles of the White House.”