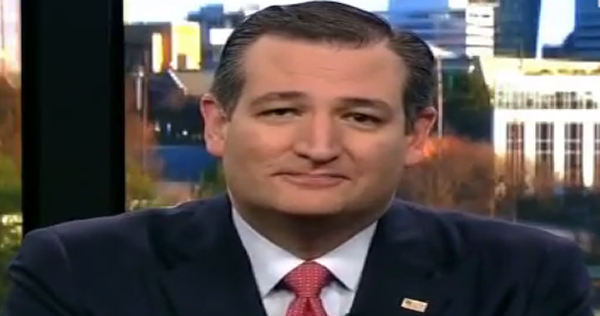 The overzealous effort by Senator Ted Cruz campaign to get their man in the White House may end up costing him the coveted position instead.

After the first incident in Iowa where his campaign put out information that implied Dr Ben Carson appeared to be withdrawing from the race – when he wasn’t, voters wondered, “If he runs his campaign like that, how would he be as President?”

And then there was that other incident, also in Iowa, of the ominous and official-looking bulk mailing that many recipients perceived as borderline unethical, despite Cruz claims of it being legal.

Of course, it wasn’t Senator Cruz who executed these dubious deeds. But it was Senator Cruz who publicly apologized to Dr Carson in front of the nation during the televised debate. Of course the candidates want camera time, but preferably not that kind of camera time.

Now, only two stops later on the campaign trail, the Cruz campaign is issuing apologies once again for careless and inaccurate statements that were made in haste to make a competitor – in this case Marco Rubio – look bad.

Cruz campaign spokesman, Rick Tyler, in his zest to tear down a competitor in the race, posted an inaccurate story to Facebook that he later had to delete and apologize for that has caused unwelcome embarrassment to the campaign. 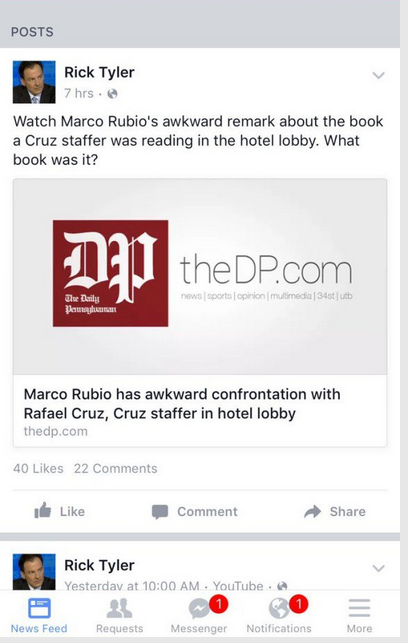 The flap at issue involved an unexpected encounter in the lobby of the Columbia Hampton between Senator Rubio and Rafael Cruz, Senator Cruz’ father, and a Cruz campaign staffer, Christian Collins. See video below.

As Rubio walked past the two men sitting at a table, he remarked about the book Collins had open in front of him on the table.

A witness to the encounter thought they heard Rubio say, “Got a good book there. Not many answers in it, especially that one.” The witness perceived the comment as an insult, especially given the book on the table was the Bible, and felt compelled to report them in The Daily Pennsylvanian. They were subsequently reposted on social media by Rick Tyler who made sure to mention Rubio’s supposed knock on the Bible.

However, the comments the witness thought he heard and didn’t confirm were not what Rubio actually said.

Rubio communications director Alex Conant pushed back, labeling the Cruz campaign’s tactics a “dirty trick.” He included the video with a transcript of the exchange to clarify what Rubio had said.

Collins later did the due diligence that should have been conducted before the original mistaken assault was initiated.

“I assumed the person who posted the story did their job,” Tyler said. “They did not.”

Tyler spoke with Christian Collins, the Cruz staffer in the video to whom Rubio had spoken to confirm what occurred. Collins supported the Rubio campaign’s version of the encounter. “No, no, no, he was very nice to me,” he recalled of the exchange with Rubio.

Tyler said, “I realized that the story got it wrong, so I deleted the post. When he [Collins] told me it was wrong, I pulled it down.” 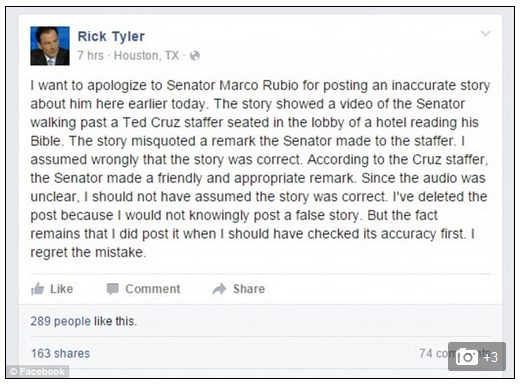 As a result, Senator Cruz has to pull his campaign out of a hole and attempt to erase the smarmy, slimy image that many now ascribe to his campaign because of the ill-advised tactics of his overzealous staffers.

This current campaign has so many unconfirmed allegations that have no basis in fact, it makes you wonder if any candidates have a foot in reality.

Do none of them feel they’re well enough equipped and qualified for the job and, therefore, their only route to success is in trying to demonstrate the competition is even less qualified?