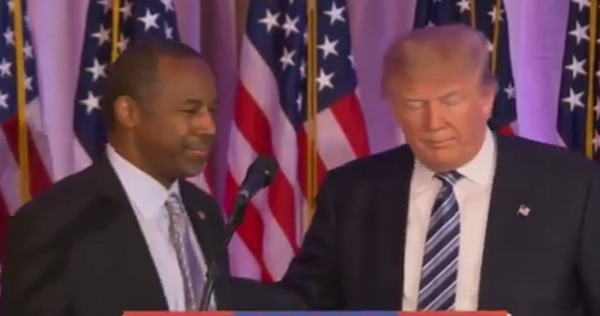 After deep prayer, famed neurosurgeon and former presidential candidate Dr. Ben Carson, stepped back into the spotlight to endorse his former rival, Donald Trump, for president of the United States of America.

Trump welcomed the Carson endorsed and claimed the two men had apologized to each other for the barbs exchanged on the campaign trail.

Trump described how he first attacked Carson on during the campaign. “I started going after Ben when he leapfroggd me in the Iowa polls,” he said. “I was really impressed with the way he fought back, because he fought back with silence and strength.”

Carson told reporters the hatchet had been buried. “That was political stuff. And that happens in American politics,” he said. “The politics of personal destruction, all that, it’s not something that I personally believe in or anything that I get involved in. But I do recognize that it’s part of the process. But we move on.”

Carson said he was surprised that, between Trump and himself, “there’s a lot more alignment philosophically and spiritually than I thought there was. That actually surprised me more than anything.”

The thoughtful and quiet Carson said he believes Trump can heal the large divides between Americans – black and white, left and right, rich and poor. “We’re in the process of going off the deep end,” he said. “We’re fiscally irresponsible. We’re hating each other.”

Carson also warned the GOP establishment leaders who have expressed concerns about Trump winning the nomination. Carson said it would be “extremely dangerous” should political parties try to “thwart the will of the people” and that they must let the “voice of the people be heard.”

Speaking like a neurosurgeon, Carson commented about the complexity of Donald Trump, saying there “are two different Donald Trumps. There’s the one you see on the stage and there’s the one who’s very cerebral.”

“I’ve come to know Donald Trump over the last few years. He is actually a very intelligent man who cares deeply about America,” he said. “As they begin to see the real individual there … we are going to begin to be comforted as a nation.”

Both men acknowledged that no official role for Carson has been discussed.

Carson reinforced the position. “We have not talked specifically,” he said, “about a role other than being involved and helping formulate policies, and trying to make America great.”