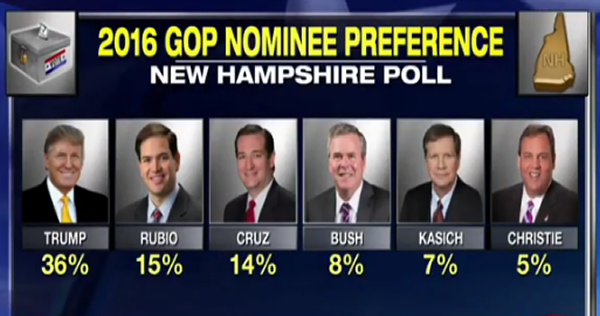 “Well, I’m going to go out on a limb and say I think Trump will probably win,” said Gingrich, continuing: “Trump’s great strength is he is bigger than anybody else in the race. He’s done bigger things. He’s built bigger companies. He has bigger ideas.”

The prize in reference was the New Hampshire primary.

Former Representative, Speaker of the House and Presidential candidate, Newt Gingrich – dislike what parts of him you will – provides clear and insightful analysis into the Republican campaign.

Demonstrating the academic analytical chops of the university professor he is, he outlines poignant, yet simple, steps that could sew up the nomination for the leading Republican candidates, especially Donald Trump.

“But, I have to tell you,” Gingrich continued. “I think this recent round by him doesn’t help him. It shrinks him. All this ‘back and forth’ with Ted Cruz is, in my judgment, as a political figure is stupid.”

“People don’t want to elect a president who engages in 7th grade recess name calling. And that’s what this is like. These guys are out there on the playground yelling at each other. It doesn’t help Cruz. But it really doesn’t help Trump.”

“Trump’s great strength is he is bigger than anybody else in the race. He’s done bigger things. He’s built bigger companies. He has bigger ideas. And now he’s just kind of shrinking himself in a way that I’m really surprised by. And I really think it is very much to his disadvantage.”

“I think he probably is still going to win New Hampshire.”

It seems the Trump campaign has already taken note of Gingrich’s analysis here, too, as Trump appeared to turn down the heat on his recent fiery missives directed at Cruz.

On Rubio, Gingrich noted that he has received from strong endorsements from some U.S. Senators, which stands in stark contrast with Cruz, who hasn’t won many friends in the Senate.

Gingrich also commented on how dire Hillary Clinton’s campaign has become. He said she demonstrated a “lack of any ethical framework” and “she ain’t got no appeal.”