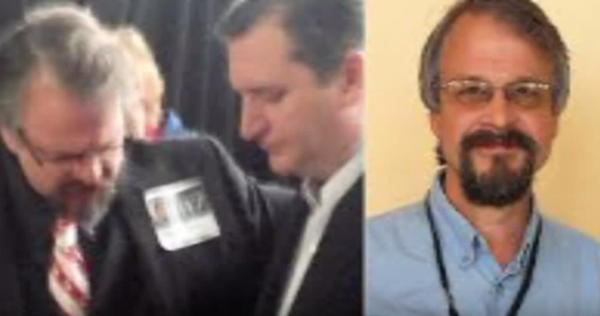 The pastor of a prominent Idaho church was shot and critically wounded in the church’s parking lot Sunday, a day after he delivered the invocation at a campaign rally for Republican presidential candidate Ted Cruz, authorities told NBC News.

Matthew Remington, Remington’s nephew, told NBC station KTVB of Boise that his uncle was conscious and was talking to emergency workers on the way to the hospital.

The gunman fled and remains at large. Coeur d’Alene Police identified the suspect late Sunday as Kyle Andrew Odom, 30, a white man in his mid-30s with blond hair and blue eyes. Odom was believed to have been driving a 2004 silver Honda Accord, and police warned he should be considered armed and dangerous.

Odom was said to be a corporal in the Marine Corps who studied biochemistry at the University of Idaho, according to his Facebook page.

Associate pastor John Padula told NBC station KHQ of Spokane, Washington, that there is surveillance of the man waiting in a silver car for Remington after church services on Sunday. He was also identified as having attended church services prior to his attack on Remington.

Padula said the church was praying for the gunman as well as Remington. “We don’t love him less than anybody else,” Padula said. “And we pray that he comes to know Jesus Christ as his lord and savior, so we don’t want to see anything bad happen to him, either.”

Remington, a prominent spokesman for conservative issues, delivered the opening prayer for Cruz, a U.S. senator from Texas who is among the leading candidates for the Republican presidential nomination, at a rally Saturday at the Kootenai County Fairgrounds.

Pastor Remington has spent years building a faith-based recovery program for drug addicts and alcoholics and he has counseled jail inmates. Remington is the director of Good Samaritan Rehabilitation, which provides drug and alcohol treatment.

“He lives for God and for everybody else. He is the most selfless man I have ever met in my life,” Padula said.

The motive for the attack is unknown. Whether the suspect, Odom, had a drug problem or was expressing his intolerance for Pastor Remington’s prayer with Cruz or some other issue remains to be confirmed.