In the UK, across Europe and as far away as Australia, protestors marched in unison in opposition to the Islamization of the west.

In Birmingham in the UK, marches carried signs stating “Trump Is Right” acknowledging the proposed plan of the U.S. President-Elect to ban the influx of Muslim refugees until a reliable vetting program is in place.

The international rally was organized by the group: PEGIDA – Patriotic Europeans Against the Islamization of the West, which was founded in Germany and has many branches across Europe and elsewhere.

From Dresden, Germany to Calais, in northern France to Canberra, Australia to Dublin, Ireland to Warsaw, Bratislava to Graz, Austria to Amsterdam, Holland to Prague and Brno, Czech Republic to Birmingham, United Kingdom the message was delivered loud and clear by tens of thousands of citizens to halt the Islamization of their countries and that the unprecedented influx of refugees from Africa, Asia and the Middle East has reached the breaking point.

In Prague, the leader of the anti-Muslim movement there, Martin Konvicka called the influx of refugees an “invasion” that posed a “huge threat for us all.”

In Birmingham, UK, the former English Defence League (EDL) leader, Tommy Robinson, gave a speech in front of a group holding a banner which read: “Protect freedom. Reject hate.” Robinson spoke about the movement and its intent:

“We are ordinary people, we are opposed to the Islamization of not just our country but the rest of Europe.

We are part of the European Union so it affects us, what decision Angela Merkel makes they affect us here.

We have got many different races here today, I don’t incite any hate, I oppose hate. I would like you to tell me what have I said that is hatred.

I have never been anti-immigration, my mum was an immigrant to the UK. I have never said I am either.

I am opposed to Islamization. I don’t care who comes into the country as long as they are not coming in to cause us harm.

The growing influence Islam has on society is not good for society. The more Islam, the less freedom, that is a realty.

I don’t believe that we should be bringing in last year one-and-a-half million fighting age Muslim men into Germany, 600,000 of them have gone missing, 160,000 have gone missing from Sweden.

We don’t know who they are, we don’t know what their motives are in being in Europe. We have already seen 130 people killed by so-called refugees in France.

I didn’t make 360 Muslims try and commit acts of terrorism last year, I didn’t make 2,000 British Muslims go to fight for ISIS. I didn’t do that, they did it… I’m just telling the truth.”

For the most part the rallies were peaceful, although arrests were reported where scuffles broke out between PEGIDA marchers and local opponents of the movement.”

There were many placards rejecting the importation of the rape culture that has escalated dramatically with the influx of the Muslim refugees who possess a very different attitude toward women.

Many in the crowd carried signs endorsing the U.S. President-Elect, Donald Trump, which read: “Trump Is Right.” 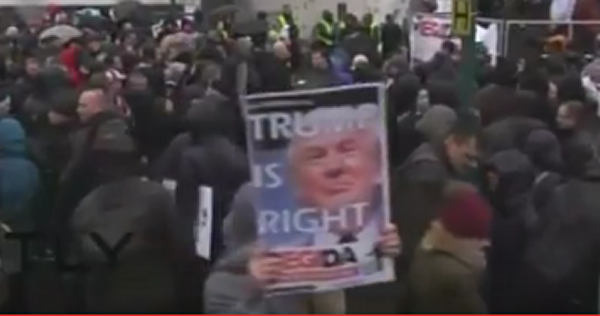 In Birmingham, UK, the rally and one-hour march were conducted almost without incident. Chief Superintendent from West Midlands Police, Alex Murray, said discussion and planning had been ongoing for months. “We had a large police presence on the ground, including protest liason officers, in order to deal effectively with any issues,” he said. “But we were confident the rally would be peaceful, our negotiations with Pegida representatives were positive and they stressed their intentions to express their views lawfully.”