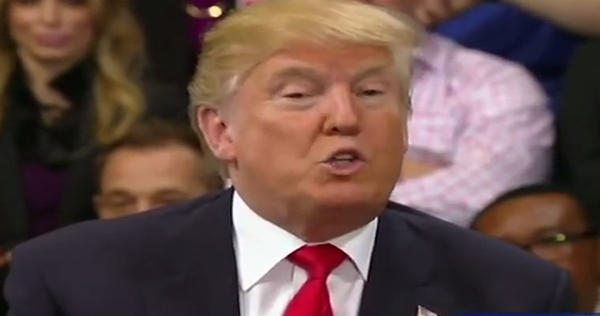 Donald Trump fielded numerous questions at a Town Hall meeting at Caesar’s Palace in Las Vegas, ranging from whether or not he would appoint an Attorney’s General who would obey the law to how he would gain more support from millennial voters.

A young woman posed the question: “Being a millennial, how can you better inspire my generation of young voters and gain our support?”

Trump answered that he had large numbers of young supporters at every stop along the campaign trail. Then he responded directly to her question.

“They wanna see strength, they wanna see security, they wanna have a job when they get out of college,” Trump answered. “They wanna have jobs when they get out of college or wherever they’re coming from, including high school, frankly, because there’s some people who go to high school and they’re fine and they want a job but they can’t get a job.” The GOP frontrunner went on to criticize the U.S. jobless rate, which currently stands at 4.9%.

“The jobs numbers are phony numbers,” Trump explained. “They were put there to make politicians look good, in particular presidents look good. Because we probably have 25% unemployment. If we didn’t you wouldn’t have crowds like this coming and you wouldn’t have 10 and 12 thousand people every time I speak.”

“We have a tremendous jobs problem. We’re losing our jobs to other countries. And what we’re going to do is have great security, great safety,” he continued. “But we’re also going to create jobs for this country. And one of the things I’ll be best at:

“I’ll be the greatest jobs producing president that God ever created.”