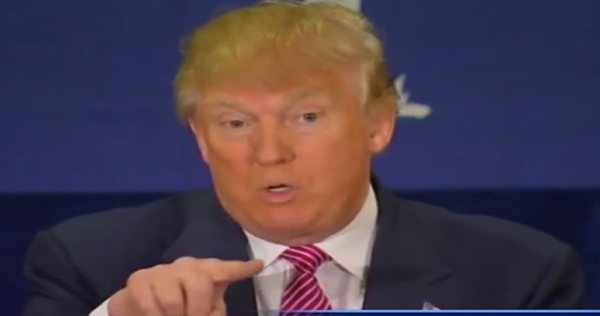 Speaking at Mt. Pleasant, South Carolina, presidential candidate Donald Trump expressed that he was particularly angry at how the most recent debate on Saturday night was conducted by the Republican National Committee.

He was incensed and issued a warning the RNC “better get its act together. Because, you know, I signed a pledge, but the pledge isn’t being honored by them.”

Trump complained that “the whole room was made up of special interests and donors, which is a disgrace from the RNC.” He continued, “Because those tickets were all special interest people. And I know them. I’m looking at them in the audience. Some of them are friends of mine and yet they’re booing me because they’re having fun.”

He claimed that the RNC hasn’t been upholding its duty and suggested that he might reconsider his pledge, which was a pledge to not run as an independent candidate but to stay within the Republican fold.

Hear him in his own words: “Just remember what I said. Remember in this room. I signed a pledge, but it’s a double edged pledge. And, as far as I’m concerned, they’re in default of their pledge when they do that.”