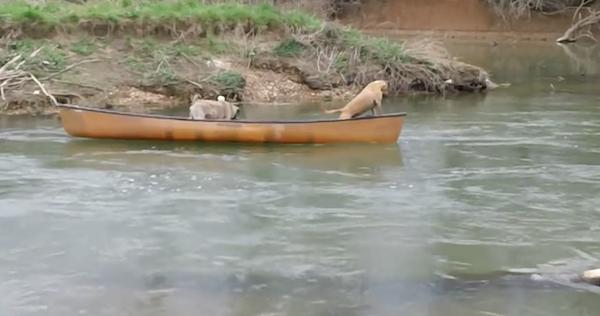 Robbie The Dog Saves The Day!

The dogs were in no danger. They all grew up on the river from the time they were just a couple months old. Robbie, the black lab, had the strongest legs I’ve ever seen on a dog. He would jump up 5′ into a tree and stand up on the limb against the trunk looking up at squirrels. Our dogs would swim an entire 11 mile float trip. Robbie actually taught us that he would retrieve the canoe. It is a Kevlar canoe and is so light that the slightest wind would release it from a beach and it would drift into the river. Robbie would go get it for us. Then came the other dogs. They are so accustomed to floating that when we would purposely go to shove the canoe into the river so Robbie would go get it, they would always jump in the canoe. It was annoying and after a while we just shoved them and the canoe out into the river. It became a game. Then we taught Rusty, the Redbone, to retrieve the canoe. That’s how he knows what to do with the rope an in the video he is trying to get the rope to Robbie. Bullet, the brindle Mountain Cur, is bred to track and bark up squirrels. So he likes to talk (bark). The Redbone likes to talk (bark) too. In fact, they bark on command, either with hand signals or by saying certain “key” words. “Speak” works too, but we don’t use it much since we taught them to speak when certain other words are said. Robbie, is too old now and has arthritis. He can’t do much. Bullet and Rusty are still very active even though they are only 1 and 2 years behind Robbie. But they have “hound” in them.  :))  Now Robbie has to have a life jacket in the water and he doesn’t last long.  :(“

VIDEO: 2 Dogs Stuck In Canoe  — You Won’t Believe Who Saves Them!