Earlier this year the Florida Senate voted 24 to 14 to approve ‘American Laws for American Courts’ legislation.

When the Florida Senate approved ‘American Laws for American Courts’ legislation it prohibited any foreign laws, including Sharia law, from being considered in state courts if such provisions are inconsistent with the Florida and United States of America Constitutions.

States like North Carolina have already passed similar legislation making it clear that there won’t be any law enforced in the state besides the US Constitution and the laws of the state.

The concern is that Muslims will start demanding that Islamic civil law, known as sharia, be used in state courts. This would effectively void our laws of the land giving them the ability to bypass local laws when dealing with concerns like marriage, children, or the treatment of women. As we have seen, these foreign customs can frequently be at odds with our state and federal laws.

Sharia dictates specific rules for wife beating, dictates that homosexuals be executed by being thrown off the tallest building in the city, allows men to own their wives to do with them as they please, and permits men to marry girl as young as six years old . . . like Muhammed.

Here are the relevant provisions of the bill:

Defines “foreign law, legal code, or system”; specifies public policy on application of foreign law, legal code, or system in proceedings relating to dissolution of marriage, support, time-sharing, UCCJEA, & UIFSA; provides that certain decisions rendered under such laws, codes, or systems are void; provides that certain contracts & contract provisions are void; provides for construction of waiver by natural person of person’s fundamental liberties, rights, & privileges guaranteed by state or federal constitutions; provides that claims of forum non conveniens or related claims must be denied; provides that act doesn’t require or authorize court to adjudicate, or prohibit any religious organization from adjudicating, ecclesiastical matters in violation of specified constitutional provisions or to conflict with any federal treaty or other international agreement to which U.S. is party to specified extent.

I cannot imagine why anyone who understands any portion of sharia law would object to the ban, but as you can see, the vote was split right down party lines. Every Republican voted against sharia law and every Democrat voting in favor of considering sharia law in our courts. 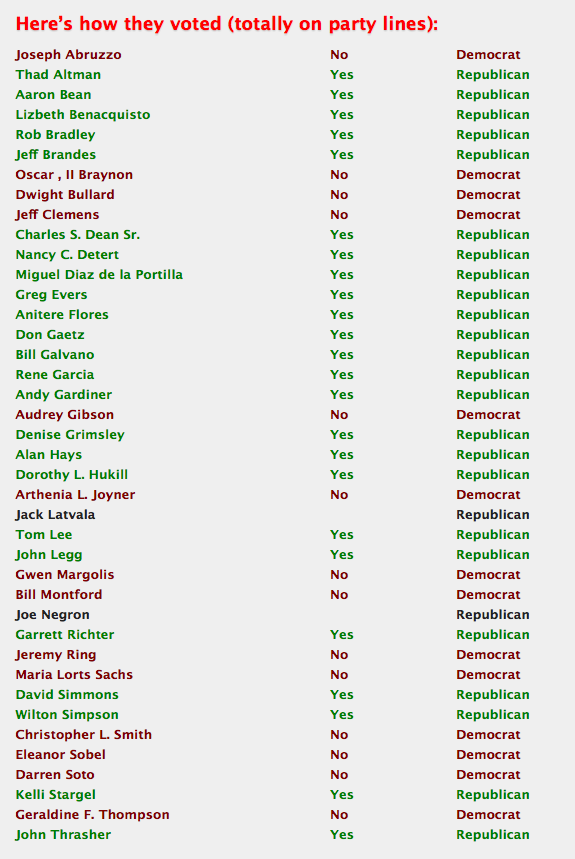 WHY WOULD ANYONE VOTE NO?