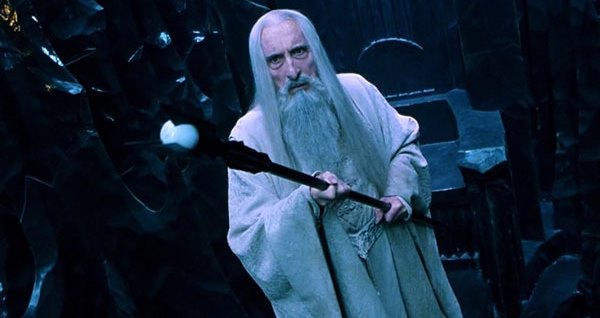 In the epic novel, Lord of the Rings, by J.R.R. Tolkien, there is a group of wizards sent down from on high to combat the forces of evil by inspiring the people of Middle-Earth. They are led by Saruman the White, a good and decent wizard but, like all of us, one with a soul that can be tempted by evil.

In the beginning, Saruman, it can be argued, is just being pragmatic. He seeks power not because he is evil, but to defeat evil itself in the form of the Dark Lord Sauron. But, in the end, the power he seeks is too intoxicating and he is overcome by the very evil he vowed, whether just to others or to himself as well, to destroy. It is a story as old as time and one which will be repeated until the end of time.

Politics is, first and foremost, the study and practice of human interaction and humans, being the imperfect beings that we are, are faced with imperfect choices. We are faced with supporting a bloodthirsty dictator in some far off country, but only because he’s less bloodthirsty than the militant jihadi terrorist he’s keeping at bay. We joke about having to choose between the lesser of two evils when we go to the ballot box every November; a joke we tell ourselves is a joke because the truth can sometimes be far more real than we’d like to admit.

And politicians tell themselves that their choice to support a particular piece of legislation or to join forces with another politician they often disagree with, while on its face may seem abhorrent, is in the end, a choice made for “the greater good.” After all, “if I don’t vote for this bill, a far more harmful bill may be passed or, worse yet, I could lose my bid for re-election and the other guy, who is far worse, will win.”

These rationalizations are just that; rational. In a world of imperfect choices what a wide-eyed idealist sees as irrational is, in fact, the only rational choice. But as the decent among us are forced to make decisions that are increasingly indecent, we continue to rationalize those decisions to the point that we can forget what the decent thing was to begin with. Sometimes the means can justify the ends.  It is an imperfect world after all so there are very few pure actions we can take anymore, if we ever could. But what we must never forget is that those actions are, in fact, impure and we may very well be sacrificing our souls for what many may deem the greater good. (It’s why so many soldiers are haunted by PTSD; the greatest sacrifices they must make are often not physical or even mental, but spiritual.) More importantly, we must not forget that the closer we get to the power we once sought to destroy, the more and more we mirror that power.

I don’t know Chris Christie, Jeff Sessions, or the scores of evangelical preachers who have endorsed Donald Trump. I’ll assume that their motives are pure even if I believe their actions aren’t. Maybe they all believe that the GOP has become so watered down ideologically that the only way to save this country is to “shake things up”. Maybe they think the greatest threat to this nation is an influx of immigrants, be they terrorists or simply folks seeking to “take our jobs.” Maybe they view Trump as the inevitable candidate and believe we must get behind him now so we can take down the greater “evil” that is Hillary Clinton. All of these arguments have at least some merit to them and that’s exactly what makes them so dangerous.

At the end of World War II we dropped a pair of atomic bombs on Japan. All but the most naïve or ideologically stubborn believe that was the best course of action. Had we not, the war would have continued on for months, if not years, and resulted in far more death on the side of not only the Allies but the Japanese as well. Somewhat counterintuitively, dropping “the bomb” was the humane thing to do. But in doing so, the “collateral damage” done to tens of thousands of civilians in Hiroshima and Nagasaki may have been the least egregious. The Cold War was anything but cold and the nuclear age remains with us, perhaps even more dangerous now with actors like Kim Jong Un and the Ayatollahs on the world stage. Was the Manhattan Project worth it? Probably. After all, if we, the “good guys” hadn’t invented “the bomb” the Communists would have been left to march freely across the rest of Europe and the rest of the world. But despite the threat that we curtailed because we went nuclear first, we must never forget that the genie we let out of the bottle can never be put back again.

And so it is with Trump. Forget that his claims of conservatism or Christianity are laughable (or at least they were until he started winning primaries). The man is just far too dangerous. In our desire to defeat Hillary Clinton or the lukewarm politicians in the Republican Party, we are employing a nuclear option that can never be undone and, hear me now, believe me later, will not defeat the opponents of the true conservatism that we all seek to defeat, but only embolden them after the Republican Party is left decimated by the mockery it has become with Trump at the helm.

So we have a choice. We can refuse to give in to our temptations to seek the “One Ring” that gives us the immense power to destroy the Dark Lord Sauron, whatever threat, real or imagined that may be; or we can stand with the light, however dim it may seem (and I do agree that it pales in comparison to what it once was or should be).

Pragmatism is important. In fact, in the game of politics, it may be the most important. But it is not so important that we must sacrifice our ideals completely in order to “make a deal,” especially a deal with a man like Trump, so utterly devoid of character and full of narcissism that he feels no need to seek forgiveness from God and threatens to sue anyone who dares insult him.