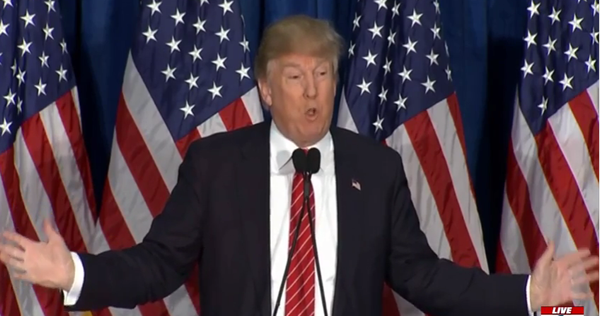 Republican presidential candidate Donald Trump has been described by critics as one who selectively respects the Constitution and the Bill of Rights, and who, if elected, might be susceptible to liberally exercise the use of executive order.

Consider Trump’s documented history with the Constitution to ascertain how warranted these concerns may be.

In a landmark achievement in 1868, the Republican controlled Congress ratified legislation that became the 14th Amendment Citizenship Clause within the Constitution. The clause established and preserved the principle of birthright citizenship and also overturned the 1857 U.S. Supreme Court decision in Dred Scott v. Sandford, which had said that persons of African descent could never be U.S. citizens.

During the current campaign, Trump has claimed this clause was the “biggest magnet for illegal immigration” and he has vowed to “end birthright citizenship,” choosing to utilize and emphasize the inappropriate term – anchor babies – more for its media sizzle than for its truth.

The word “anchor” in the term “anchor babies” refers to the birthright citizenship of a child born in the United States. Trump, and others, allege that child can turn around and sponsor his/her parents and that parents are so manipulating their circumstances, since it’s unlikely any infant might negotiate the bureaucracy for the benefit of its parents. The baby essentially becomes an anchor for the parents to remain here.

But the current law states a child cannot sponsor a parent before the child reaches 21 years of age. It also states that undocumented parents must wait for 10 years outside American before qualifying. This would effectively require undocumented parents to wait over 30 years before being eligible to apply for a green card.

The truth is: the law, as is, is more than adequate. Mr Trump does not need to blow up the 14th Amendment. The enforcement of that law is the issue. The judicial branch needs to do its job.

The Fifth Amendment contains a provision protecting private property rights – “nor shall private property be taken for public use,” – with which Mr Trump has tangled on numerous occasions. Trump and his properties are not public properties, yet Trump has privately profited, handsomely, when government officials have seized and bulldozed homes and businesses and then made the property available to certain crony capitalist real estate developers.

The First Amendment expressly forbids the government from closing places of worship, whether they’re churches, mosques, synagogues or temples. Yet, Trump has said the government should assert its power and close mosques.

The First Amendment also protects freedom of speech and freedom of the press. However Trump wants to lift libel laws so he can sue any journalist or publication that publishes a piece that he deems unfair or unkind, especially to him. He has also called for the government to censor parts of the internet.

The country learned during World War II that President Franklin D. Roosevelt’s Executive Order 9066 – the internment of Japanese-Americans – was wrong, reprehensible, and a horrible and costly mistake. And yet, Trump has cited it as an example to repeat today in response to the threat of the radical Islamic extremists – a blanket solution that would harmfully impact innocent people unnecessarily. In an era of such impressive technical precision, it seems less than creative and absurd to operate with such a dull strategy.

We began searching for episodes in the current presidential campaign that demonstrate where candidate Donald Trump is consistently aligned with the Constitution and the Bill of Rights, where he demonstrates respect for due process, equal protection and limited executive powers. One more chance.

Trump has been clear in his unequivocal support for the Second Amendment, which he clearly has stated is America’s first freedom. Trump believes the right to keep and bear arms protects all our other rights, and that a concealed carry permit should work in every state. Trump says, “If we can do that for driving – which is a privilege, not a right – then surely we can do that for concealed carry, which is a right, not a privilege.”

He couldn’t get them all wrong.

If you believe in the conservative principle of a constitutionally limited government, how does Trump’s apparently consistent preference for untrammeled government power square with your beliefs?