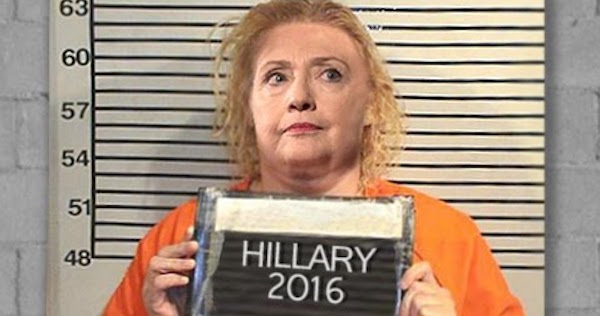 Hillary’s Got A Lot To Lose!

Hillary’s Got A Lot To Lose,
Will Obama Block The Feds? Will The FBI Block Obama?

Of course she’s cheating, of course she called in Henchman Harry Reid to steal Nevada. It’s how she plays the game. But this time the stakes are higher, much higher. This is her last shot at her lifelong dream of being the first woman President of the United States of America. Of course a lose would be devastating, but for Hillary, a lose could be so much worse. Obama will no longer be President and neither will she. Who would keep her out of jail?

That’s a big problem for Hillary as the FBI knows that they must get her indicted before she gets elected, otherwise she can simply pardon herself. She knows it too.

And when you’re being questioned by the FBI about a crime you know you committed it’s got to make you lose a little sleep. Even if you’re Hillary Clinton. So she’s smiling and campaigning and snuggling up to President Obama every chance she gets. You’ve noticed that haven’t you?

Now the FBI is hovering, the Republicans are jeering them on and even the Democrats are starting to wonder. The FBI is ready to indict her.

The question is of course, “will they?”

Any questions regarding adequate criminal evidence to indict has already been answered — there’s plenty, more than plenty, and they’re all felonies.

The question is, how fast can she get elected, and just how far will Obama go to block Clinton’s indictment. There is little questions that the Obama administration is applying intense pressure on to let Hillary off the hook, but he’s got his own reputation at stake here too. He can’t risk standing up for a loser. So he’ll watch and comment and support her from afar. Even though he’s leaving us, he doesn’t want his line, or his party, tied to a sinking ship.

“The Stakes Are High For Hillary“

Clinton is accused of sending confidential and top-secret State Department business over a personal Email server that she established, as some believe, to hide her actions as the Secretary of State.

Allegedly, the emails also provide evidence that the Clinton Foundation, a non-profit, may have accepted millions of dollars in donations from foreign governments.

To make matters worse, those “top secret” emails were handed over to a number of Clinton aides, including her personal attorney, who do not have “top clearance” authorization, which is once again, in direct violation of the “Espionage Act.”

Former House of Representative Member Tom DeLay speaking on the Steve Malzberg Show, explained that the FBI has said they have more than enough evidence to indict Clinton, saying;

“They’re ready to recommend an indictment and they also say that if the attorney general does not indict, they’re going public.”

It’s not as bad as jail time, but I’m sure a switch to orange is not what she had planned.

It must be frustrating to be a law enforcement official in Washington. 150 FBI agents working on the case, ‘overwhelming evidence’ of guilt, growing piles of evidence, BUT, you have to get by Barack, Hillary, and Loretta Lynch. What’s the point? If they’ll lock up Dinesh D’ Souza and let the Democrat go free, you can be sure there is a pass for Hillary. But this time they have a problem. It’s called Public Opinion.

If the FBI think they are frustrated they should try being an average American citizen who can do nothing about it . . . until now. Even if she gets an Obamapass, even if she were to be elected, the court of public opinion will convict her. Hopefully before it is too late. When Abraham Lincoln said: “You will never lose with public opinion on your side,” he was also saying:

“You Will Never Win With Public Opinion Against You”