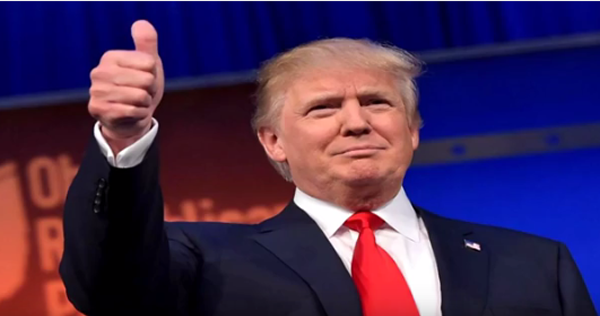 If the professor’s model is right again, and it has been accurate 96.1% of the time, billionaire Donald Trump will be the next President of the United States.

The professor presented his findings at an event organized by the Stony Brook Alumni Association at the SUNY Global Center in Manhattan. His model analyzes a candidate’s performance in the primaries for their party and patterns in the electoral cycle to predict the vote in the general election.

Professor Norpoth told the school’s newspaper, The Statesman, “The bottom line is that the primary model, using also the cyclical movement, makes it almost certain that Donald Trump will be the next president – if he’s a nominee of the [Republican] party.”

Since 1912, the only election that the model missed was the 1960 election, which gives it an overall 96.1% accuracy rating.

It Ain’t A Joke Anymore

Referring to the first hypothetical pairing of Sanders vs Trump, Norpoth said, “When I started out with this kind of display a few months ago. I thought it was sort of a joke. Well, I’ll tell you right now, it ain’t a joke anymore.”

Based on his electoral cycle model and voting patterns in presidential elections that indicate it’s unlikely the incumbent party maintains control after two terms in office, Norpoth predicted a 61% chance that the Republicans will win in the general election.

The data from the first few primaries helps focus on specific candidates. Based on Trump’s strong performance in the early primaries, the nod goes to Trump.

“Trump beats Hillary 54.7 percent to 45.3 percent [of the popular vote]. This is almost too much to believe.” Norpoth said, “The probability of that [outcome] is almost complete certainty, 97 percent. It’s almost ‘Take it to the bank.’”

“If you win by 54 percent [of the popular vote], you have a big majority in the electoral college,” Norpoth explained. “Nobody who has ever gotten 54 percent has lost.”

By comparison, if either Senator Ted Cruz or Senator Marco Rubio were the Republican nominee, the model gives Hillary Clinton a 55 percent chance of beating either of them with a 0.3 percent lead in the popular vote.

The model gives both Cruz and Rubio an edge of Sanders with a 0.6 percent gap in the popular vote and a 60 percent chance of beating Sanders.