The 2016 Presidential Election season officially gets underway on Monday evening, Feb. 1, as voters from Iowa’s 99 counties will meet in the first in the nation caucuses to determine who will represent the state at both party’s national conventions. Both races are tight and a few unexpected turn of events may very well have a big impact on the outcomes for both the Republicans and the Democrats.

A winter storm moving in from the Intermountain West will unleash a blizzard from Colorado to Iowa and northern Michigan later on Monday into early Wednesday. Voting prospects could become precarious before the close of the caucuses — which start at 7:00 p.m. CST — because of the incoming storm system, AccuWeather Senior Meteorologist Matt Rinde stated. Snow and a wintry mix will arrive in parts of the Hawkeye state on Monday afternoon and evening.

According to recent research of how weather has affected voter turnout at presidential primaries in Florida, New Hampshire and South Carolina, inclement weather is an added factor that could deter swing voters.

Uncomfortable conditions, such as snow and frigid weather, do play a role, according to Rosemary Radich, AccuWeather Enterprise Solutions business intelligence manager, who stated, “Women [voters] tend to be affected by the cold more than men,” adding that the conditions expected for the Iowa caucuses could be detrimental to the female vote. Young people, as well, tend to vote more when the weather is sunny and warm. Voter passion counts when the weather gets rough.

Democrat Hillary Clinton and Republican Ted Cruz have organized strong traditional ground games in Iowa — both have machines that can rival anyone in the race when it comes to the get-out-the-vote effort.

Indeed, pollsters have noted differences in their results when they change their assumptions about voter turnout. Republican front-runner Donald Trump’s success in particular depends on first-time voters registering and showing up to caucus. A recent Monmouth University poll found that when likely Iowa caucus-goers are polled, Trump leads Cruz 30 percent to 23 percent. However, when the pollster narrows the sample size to registered Republicans who have a history of voting, the odds shift in Cruz’s favor and he leads Trump 28 percent to 23 percent.

Democrat Bernie Sanders and Donald Trump have very much relied on their celebrity status and social media in order to energize and inform voters to get them to the polls. If either wins, it may turn the old way of political thinking on its head — not something to be underestimated in this year of the anti-establishment candidate.

While some pundits believe Marco Rubio is inching up in the polls in Iowa, according to the latest DesMoines Register poll, Donald Trump still leads the pack, 5 points ahead of Ted Cruz. Cruz’s “Voter Violation” mailer, however has irked some voters who may change their minds. 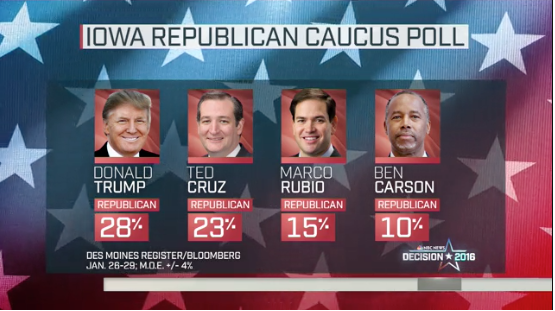 According to the Huffington Post, a recent Quinnipiac poll of likely Republican caucus-goers, 39 percent of those who support a candidate say they could change their mind by election day. A Monmouth University poll released Wednesday confirms that there’s room for persuasion — only 48 percent of GOP caucus-goers said they are completely decided.

Both Hillary Clinton and Bernie Sanders are running neck and neck, but the Monmouth University poll reports that 55 percent of Democrats say they’re completely decided. The format of the caucus provides opportunities for voters to change their minds, so those waffling on their choice could be convinced to change candidates.

The bottom line is that with all of the above variables to consider, the outcome of the 2016 Iowa caucuses is anyone’s guess.