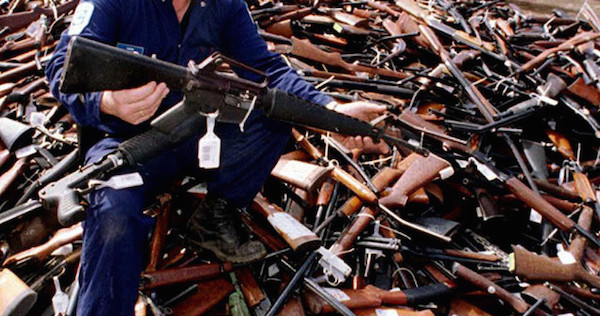 The Truth About Australia’s Gun Grab

In 1996 Martin Bryant killed 35 people with semi-automatic weapons in Port Arthur, Australia. Prime minister John Howard immediately pushed through strict national gun laws. In less than a year gun licenses were restricted, a weapons buy-back was in place and an amnesty program was created for those still possessing illegal firearms.

After Numerous Armed Robberies and Murders Many Australians Became Suspicious of Their Government’s Reports Regarding the Australia Gun Ban…For Good Reason!

As reported by Jews for the Preservation of Firearms Ownership, Australian politician, David Leyonhjelm, a Liberal Democrat Senator from New South Wales shared the following:

In 1996, Australia passed some of the most restrictive gun laws in the western world. They included bans on self-loading rifles and self-loading and pump-action shotguns, universal gun registration and a taxpayer funded gun confiscation program costing over half a billion dollars. The ongoing costs of running the firearms registration systems are unknown but have been estimated at around $28 million per year, or $75,000 per day. That’s more than what the average Australian earns in a year.

For that price tag, any accountable democracy should expect to have a decent debate about its efficacy.  But in Australia, debate about guns has been all but silenced.  Anti-gun zealots, within and outside the halls of parliament, smugly try to convince the rest of the world that Australia’s model of firearms management has been a resounding success.

“We saved lives!” they claim. “We stopped mass shootings!” they say.

To satisfy their conceit, they manipulate statistics to suit themselves and pretend that ‘the science is settled’. This is an outright lie. When you look at the real facts, it becomes very obvious that the Australian experiment with gun control is nowhere near as clear-cut as the gun prohibition lobby wants the world to believe.

There is a growing body of peer-reviewed research into the impacts of Australia’s 1996 gun laws.  Some of it comes from anti-gun groups, some from pro-gun groups, and some from groups which have no personal connections to firearms one way or the other.

Using a range of different statistical methods and time periods, not a single one of these studies – not even the ones conducted by anti-gun affiliated researchers – has found a significant impact of the legislative changes on the preexisting downward trend in firearm homicide. Firearm homicides were decreasing well before the laws were implemented, and the decline simply continued after the legislative changes.

This decline in Australia is not unique or unusual. At least two other Commonwealth countries(Canada and New Zealand) experienced similar or greater declines in deaths over the same time, even though those countries have far less restrictive gun laws than Australia.

The relationship between Australia’s gun laws and suicides is uncertain. Again, deaths were declining well before the legislative changes. Some studies find that the downward trend accelerated after the 1996 gun laws, while others find impacts only among certain age groups. Some research finds little evidence for any change, others show displacement from firearms to other methods (such as hanging).

Anti-gun lobbyists cherry-pick the statistics that suit them and ignore studies that do not fall into line with the story they desperately want to tell.

The fairy tale they prefer is that the gun laws have ‘saved 200 lives a year’, a claim based on laughably poor statistical modelling which produced estimates so ridiculous that they have been dismissed by Harvard researchers as ‘stretching credulity.

“The scientific reality is there is no consensus whatsoever about firearm laws and suicide in Australia.”

A claim you will often hear is that there have been no mass shootings since 1996, from which anti-gun lobbyists conclude that Australia’s gun laws have stopped mass shootings. But this is a half-truth. The full truth is that Australia’s close neighbor New Zealand – a country very similar to Australia in history, culture, and economic trends – has experienced an almost identical time period with no mass shooting events despite the ongoing widespread availability of the types of firearms Australia banned.

And yet, despite all the scientific evidence to the contrary, the anti-gun lobby continues to promote untruths, unchallenged. Notwithstanding the massive price tag attached to Australia’s gun laws, proper debate is still not taking place. Despite the fact that other policies may be far more effective at saving lives, dissenting views about the gun laws are ridiculed and shrilly shouted down.  Yes, the rest of the world can indeed learn a lesson from Australia’s gun control experiment. But that lesson is really not about gun laws. It is about the dangers of allowing lobbyists, politicians and the media to prevent a rational debate.”

It is interesting that the threat of increased gun control in the United States has gun sales skyrocketing yet the number of gun related crimes continues to decline. Figure that one out?

Sources: Jews for the Preservation of Firearms Ownership, Davidleyonhjelm.com.au