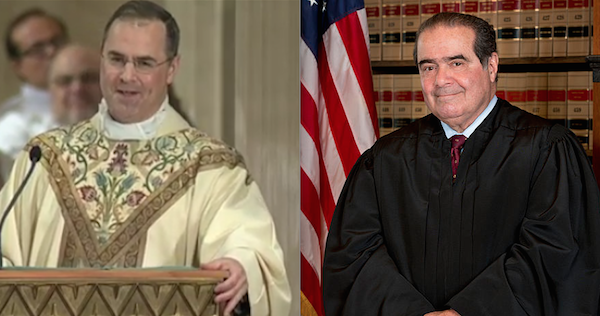 “God Blessed Dad With A Love For His Family,”

Supreme Court Justice Antonin Scalia died on Saturday, Feb. 13, 2016. He was remembered as a man who loved God, country and family at a funeral Mass in Washington, D.C.  The  February 20th service was led by Scalia’s son Paul, a Catholic priest.

His son’s words give us touching insights into the private life of a man who has had more impact on The United States of America than we may ever fully understand. Now we might begin to grasp who this giant really is. This is what his son had to say:

This past week, my eight brothers and sisters and I have been sharing memories of our father, Supreme Court Justice Antonin Scalia. We’ve told stories most of us have heard a million times, but that carry new meaning now. As proud as we are of his legacy as a jurist, of course it’s his presence in our personal lives that we’ll miss the most.

My own most vivid memories of Dad are set at the kitchen table. Someone once said to my brother, “You must have the most fascinating dinner conversations.” We always get a good laugh out of that one. It’s true that we’d often discuss law, history and politics. But Dad’s running gags ensured our kitchen would never be mistaken for a salon. Poor conversationalists got it worse than an unprepared lawyer during oral arguments: If anyone said “um,” Dad would lead a chorus of “ummmmmmms” to spotlight this oratorical shortcoming. Sometimes the umming would spiral into a rendition of “Thus Spoke Zarathustra.” (After his confirmation hearings, we were more than happy to point out that he had often said “uh” to the senators.)

Even when dinner conversation proceeded “um”-free, it could still descend into another of Dad’s favorite pastimes: crumpling his napkin into a ball and throwing it into one of our glasses. Counterattacks were futile, equipped as he was with a narrow wine glass.

Most nights after dinner, he’d go into his study to work. There, he was a distant figure, to be left alone to read and write. Sometimes when I came home late at night, his reading lamp would be on and I could see him through the window, leaning back in his chair with headphones on, listening to Bach as he drafted an opinion. Once inside, I’d knock on his door, say good night, then leave him to his work.

During one college break, he let me write my honors thesis in his study. Though thrilling at the time, in retrospect I was just a boy trying on his father’s suit.

My dad had a rich tenor voice, perfect for reading stories to his grandchildren — his rendition of “The Night Before Christmas” was an annual tradition — and for leading singalongs at parties (he also led on the piano) and on long car rides (the less said about our family’s cross-country drives, the better).

He drove us to Mass every Sunday. He brought with him his well-worn Roman Missal, its pages wrinkled from holy water and packed with decades-old prayer cards. His behavior during Mass was not always restrained. If he disagreed with a priest’s point during a sermon, he would lean forward, look toward my mother, and frown or shake his head. That was his dissent from the homily. On the other hand, if he liked a sermon, he’d tell the priest as much afterward. We all saw how important Mass was to him, his eyes closed, head bowed as he moved deep into prayer during the consecration and after Communion.

He was stricter than we would have liked, and I don’t mean with his originalism. We could have done without the weekends he made us work in the yard. I once tried to beg off mowing the lawn by pointing out that I had a cross-country meet that weekend. So he did it himself — after reminding me that a Supreme Court justice probably had better things to do, too.

Dad loved opera and classical music. He’d play conductor with the radio as intensely as a teenager playing air guitar. He enjoyed the Great American Songbook, too, plus country and bluegrass, and in recent years he and my mother came to know the musician Ricky Skaggs. And there was the steel pan band at my wedding reception. Amazed by the instrument’s sounds, Dad peppered the drummers with a million questions. It didn’t hurt that they played some Sinatra.

He loved the Yankees. My mother loves the Red Sox. This conflict makes their 55 years together almost as impressive as his friendship with Justice Ruth Bader Ginsburg.

For many years, we played a touch football game at Thanksgiving. We called it the Scalia Bowl. It generally went well for about 30 minutes before someone — often Dad — would contest a call or debate the proper interpretation of a rule. Many games ended with one of us storming off the field in disgust. Luckily, no media were there to cover the event.

I used to worry that Dad might die without knowing how much we all loved him and how proud we were of him. I worried that regret would haunt us, that we’d wish we’d had the courage to tell him how we felt. But I think we did a good job of showing our love and pride. It turns out that the pain we feel now is as simple, direct and sharp as the sort of sentence Dad is famous for: We will never see him again.”