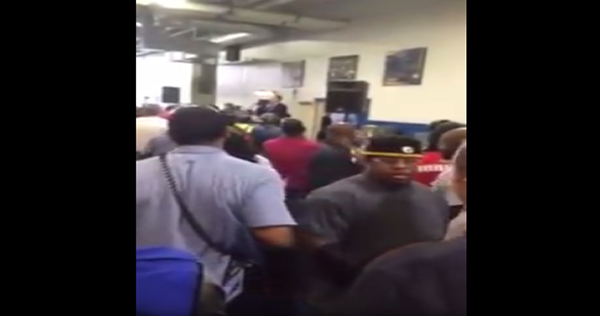 This is exactly the type of corporate move that presidential candidate Donald Trump says he would put a stop to.

The president of Carrier Heating and Air, Chris Nelson, addressed employees who were pulled off the manufacturing floor to hear his message, which was met with jeers, obscenities and outrage.

Nelson informed those assembled that, beginning in 2017, the company would begin a three-year transition of operations and jobs from their facility in Indianapolis, Indiana to Monterrey, Mexico.

By the time the transition is completed in 2019, 1,400 workers will have lost their jobs.

Donald Trump was furious and vowed on stop this kind of export of jobs to Mexico.  In a tweet he said:

“I am the only one who can fix this. Very sad. Will not happen under my watch!”

Trump spoke to Breibart News where he stated:

One 13-year veteran worker at the plant, Dominque Anthony, said, “You taking away from this community by taking this job, this plant away. The president came today and said we were not making enough sales so they’re moving it to Mexico.”

“I have almost 16 family members that work there at Carrier,” he said. “They have to go and tell our family that we have lost our jobs to feed our family.”

The company released a statement stating the company hopes these moves will help “meet customer needs.”

“This move is intended to address the challenges we continue to face in a rapidly changing HVAC industry, with the continued migration of the HVAC industry to Mexico, including our suppliers and competitors, and ongoing cost and pricing pressures driven, in part, by new regulatory requirements.”

“Relocating our operations to a region where we have existing infrastructures and a strong supplier base will allow us to operate more cost effectively so that we can continue to produce high-quality HVAC products that re competitively positioned while continuing to meet customer needs.”

Carrier’s Nelson said, “This decision is difficult, and we recognize the impact on employees, their families and the community. We are committed to ensuring that our employees are treated respectfully and to working closely with their representatives throughout this transition.”

United Steelworkers Subdivision Directors Wayne Dale said, “It was devastating to hear, and it was not anticipated at all. It’s a total disappointment for the employees and their families.”

United Steelworkers President Chuck Jones said of the workers, “They are scared. There are a lot of questions, and people don’t know whether it’ll affect their benefits and pension. Our feeling is all the retirement benefits and whatnot are still in effect.”

Carrier put out a statement that some separation benefits, including one that pays for college tuition, books and fees, will be available.

Indianapolis Mayor, Joe Hogsett, and Indiana Governor, Mike Pence, both were marshalling local, state and federal resources, including job seeking, training and education services to support those affected by the move.

Speaking at the Republican debate in South Carolina Trump returned to the Carrier job export issue:

Reaction from employees was severe, as demonstrated in this video of the announcement.