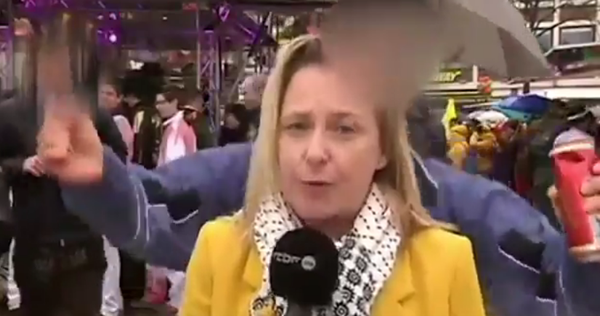 While reporting on live TV from a well-attended festival in the Alter Markt district in Cologne, a female Belgian journalist was subjected to rude sexual gestures by festival attendees and then was sexually assaulted.

Ms Esmeralda Labye, journalist for Radio Television Belge de la Communaute Francaise (RTBF), was reporting about how such sexual attacks perpetrated by ‘foreigners’ had occurred in Cologne on the New Year’s Eve celebrations not far from the site she was standing when a man grabbed her breast.

“At first they were just making faces behind me. Then a hand landed on my breast. I was shocked,” said Labye.

The video shows the men appeared to have a European appearance. Labye elaborated about the filming, “My piece to camera was chaotic, people showing middle fingers, a man who was having fun miming a sex act behind me and above all the hand place on my breast.”

Police have not released information about the identities of the men involved, although they expressed confidence they would apprehend them since the incident was caught on camera. The city of Cologne has apologized to Labye.

The city has been on edge since the events of New Year’s Eve received prominent publication. Police presence for the carnival were doubled to 2,000 police officers.

Police reported a record 18 sexual assaults including 1 rape on the first night of the Carnival. According to The Local, police confirmed they had arrested a 17-year-old asylum seeker on suspicion of committing rape.

Cologne police director, Michael Temme, attributed the increase in the number of reported incidents to women being more willing to report them.

“I don’t want to play down the incident,” Temme said. “But it shows women are more prepared to report incidents.”

After the first day of festivities, in addition to the sexual assaults, there were 143 cases of bodily harm and 30 robberies, for a total of 224 crimes reported, and 181 arrests made. There were 11 police officers who reported injuries, according to their report.