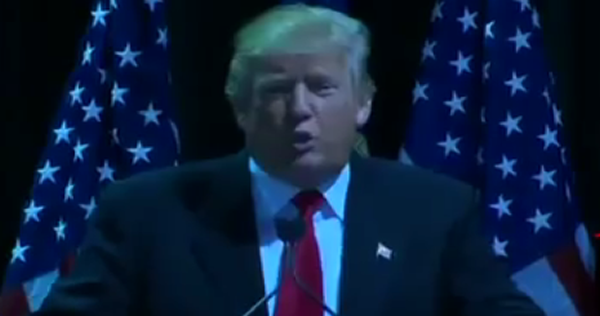 Billionaire Donald Trump was buoyant and in the moment in a stop-over rally at the Georgia World Congress Center in Atlanta.

Trump had just secured all 50 of South Carolina’s delegates in his solid 10 point margin of victory in the Palmetto State.

On his way to Nevada for its Tuesday primary election, Trump scheduled a brief stop for a campaign event in Atlanta in preparation for the March 1st Super Tuesday elections. Georgia is one of the fourteen states that will hold a primary on Super Tuesday.

Trump currently holds a lead in ten of the fourteen states slated with elections March 1st.

Celebrating with the Atlanta crowd of his South Carolina victory, Trump said, “Such a beautiful victory, such a conclusive victory.”

He launched into his familiar staple of walls, winning and making America great again, when suddenly the lights went out and the entire center was cast in darkness. Fortunately, the microphones continued to work and Trump, remaining unflappable, told the crowd, “Aw, they didn’t pay the electric bill!”

Trump rolled on, not missing a beat. “Oh, I like that much better! That’s so much better. Those lights were brutal,” he said. “Are they come from the dishonest press?” he asked as he pointed to the row of cameras in front of the stage.

Preferring the stage without the glaring lights, he said, “Don’t turn the lights on. Plus we save on electricity, right?”

To demonstrate that he can’t pass up an opportunity to negotiate a deal, Trump instinctively capitalized on the mishap. “And because the lights didn’t work,” he said, “I won’t pay the rent, so we get better lighting and we don’t pay the rent.”

When the lights did come back on, he playfully exhorted the crowd to chant “Turn off the lights!” to maintain a better atmosphere.

At first it was believed there was an electrical malfunction in the facility, however later, Trump told Business Insider, “They just told me it was a protestor that turned off the lights.”

The Atlanta rally was Trump’s first since the South Carolina victory. Due to the strength of Trump’s victory in all counties in South Carolina, Trump was able to secure 50 delegates in the state’s Saturday primary.

Not all states offer a winner-take-all delegates scenario. Most states award delegates proportionally based on each candidate’s share of the votes.

After three states, Trump has accumulated an impressive 67 delegates. Senator Ted Cruz has 11 and Senator Marco Rubio has 10. Less than 1,200 votes separated the two first-term Senators in South Carolina, with Senator Rubio in second place ahead of Senator Cruz in third.

The next Republican primary will be held in Nevada on Tuesday.