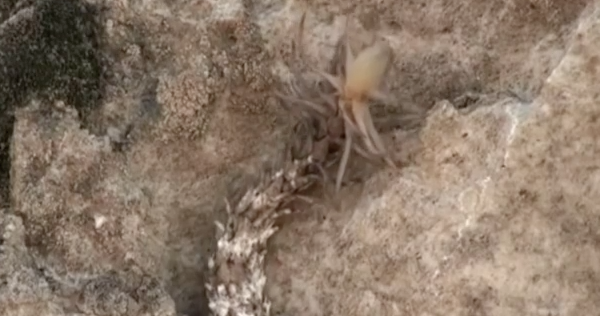 The spider-tailed horned viper (Pseudocerastes urarachnoides) is a species of viper endemic to western Iran first described by Bostanchi in 2006.

A specimen had been collected in 1968 as part of the Second Street Expedition to Iran and deposited in the Field Museum of Natural History at Chicago.

It was however found to be distinct and described as a new species in 2006. The species is distinguished by a number of characters. There are about 16 to 17 scales between the horns and the scales on the body above are rougher than on other species in the genus. There are 15 pairs of subcaudal scales and the scales on the sides of the tail are elongated and appear like appendages of an arthropod. The tip of the tail is inflated into a bulb-like shape.

The tail resembles a spider or other arachnid and the authors who described the species speculated that it was used as a lure to attract birds as a digested lark was found in the stomach of the specimen. The actual use of the tail to lure birds was confirmed by later studies in the field as the video shows.

VIDEO: The Creepiest Spider/Snake On The Planet