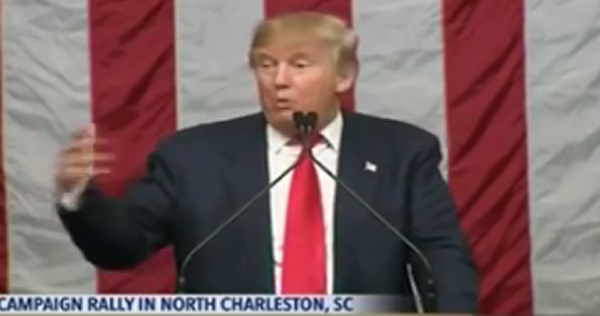 Republican presidential candidate Donald J. Trump told a story to prove how tough he is that had his audience in Charleston, South Carolina in the palm of his hand.

Trump recalled a story he believed to be true about how US Army General John “Black Jack” Pershing dealt with the Moros (Muslims) in Moro Province in the Philippines during his term as Governor between 1909 and 1913.

Trump’s version of the story was that Pershing “caught 50 terrorists that did tremendous damage and killed many people and he took the 50 terrorists and he took 50 men and he dipped 50 bullets in pig’s blood. And he had his men load his rifles, and he lined up the 50 people, and they shot 49 of those people, and the 50th person, he said, ‘You go back to your people and you tell them what happened.’ And for 25 years, there wasn’t a problem. For 25 years there wasn’t a problem All right? So we better start getting tough.”

When Trump finished telling the story, the South Carolina audience burst into applause.

Although there is no record of General Pershing ever performing such a deed, there are several other derivations that supposedly occurred during Pershing’s tenure that were performed by Pershing or by various officers. There are also embellishments that add that the lone survivor watched his killed partners put in a grave face down so they could not see Mecca and then covered in pig guts and waste before being covered over with dirt. It was believed that the Muslim belief was if a Muslim died with a pig they would go to hell rather than heaven and its rewards.

Trump claimed, “By the way, this is something you can read in the history books. Not a lot of history books, because they don’t like teaching this.”

Unfortunately he did not cite the history book in which he read the story. He offered no credible source for verification.

There is no proof that any of the alleged story recited by Trump ever actually transpired. There are sources that state the alleged stories have not been proven. See here.