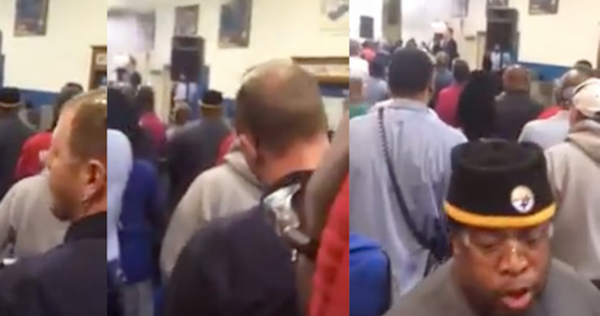 This May Be The Worst Economic Disaster In America, And It Happens Every Day!

Give away this, tax that, stick it to the corporations, and blame businesses, but THIS, may be the worst economic disaster, and it happens every day.

A crowd of Carrier manufacturing workers erupted in anger when they find out their manufacturing plant, and their jobs are being moved to Monterrey, Mexico.

Carrier, an Indianapolis-based heating, ventilation and air conditioning company owned by United Technologies, announced that the plant would undergo a three-year transition to Mexico starting in 2017. Company president Chris Nelson was recorded delivering the news to a large crowd of employees, who reacted with jeers and obscenities or leaving the meeting. Nelson told the irate crowd:

“The best way to stay competitive and protect the business for the long term is to move production from our facility in Indianapolis to Monterrey Mexico.”

The crowd erupts as Nelson pleads with them to quiet down so he can continue with the statement, saying “I’ve got information that’s important to share as part of the transition.”

Nelson then got right to the heart of this issue saying, “Relocating our operations to Monterey will allow us to maintain high levels of product quality at competitive prices and continue to serve the extremely price-sensitive marketplace.”

Which means, we are moving out of the country because we will go out of business if we don’t. Whether we like it or not, we can’t compete with foreign manufacturers when we have to operate in the increasingly hostile US business environment, it is too expensive.

Carrier employs roughly 1,400 people. There will be no immediate impact on jobs, according to local ABC affiliate RTV6.

“I want to be clear — this is strictly a business decision,” Nelson continued, drawing another round of boos.

“This was an extremely difficult decision. It was made most difficult because I understand that it will have an impact on all of you, your families, and the community.”

Carrier is one of two United Technologies plants to announce a move to Mexico — the corporation announced on the same day it would also be moving a plant in Huntington, Indiana. The closing will eliminate about 700 jobs from the city in northeastern Indiana, according to the Indianapolis Star.

Shortly after the news broke, Indianapolis mayor Joe Hogsett announced he would issue an executive order to help workers affected by the move. In addition, Star reported that Indiana Governor Mike Pence authorized the state to offer job seeking, training and education services to the workers. 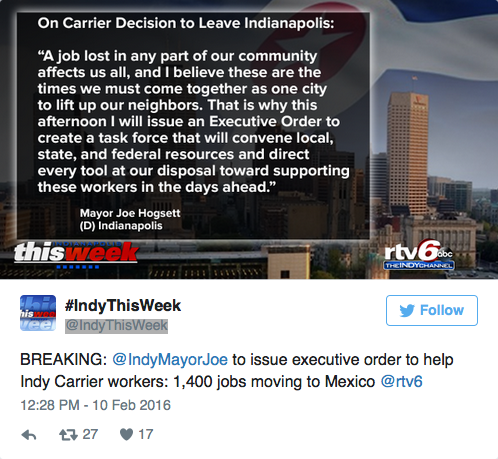 Over the roar of the crowd, Nelson went on to say:

I want to be clear, this is strictly a business decision and by no means reflects the performance this facility or any individual within. It is important that you understand that there will be no impact on jobs today. In fact the first transition will not take place until the middle of 2017. We expect the move to take place in phases over approximately three years while we ramp down our operation in the Indianapolis facility. We expect the transition t0 continue through 2019.
This announcement is of course subject to discussions with our local union representatives. We will sit down with officials of the union in the coming days. Throughout the transition we must remain committed to manufacturing the same high quality products always did. This is an extremely difficult decision. It was made most difficult because I understand it will have an impact on all of you, your families and the community.

As we continue and just as we’re doing today will provide you with as much information as soon as possible about the transition. This will allow you to understand the plan better as well as the impact on you personally. We’re committed to treating you with respect throughout this transition will work with a union representatives to help ensure that this is the case.
thank you for your attention.

VIDEO: Watch 1,400 US workers learn their jobs are moving to Mexico