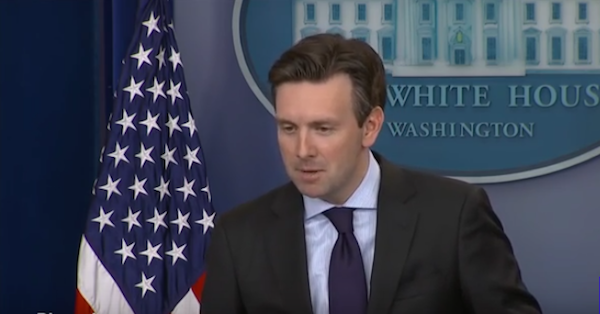 The question now is about the rest of the Republican party and whether or not they are going to be dragged into dust bin of history with him. And right now their current trajectory is not very good. They should say right now that they would not support Donald Trump for president.

“What he said is disqualifying and any Republican who’s too fearful of the Republican base to admit it has no business serving as president either.”

Do they have the courage of their conviction? To stand up to Mr. Trump’s supporters and say that they are going to side with the Constitution over Mr. Trump even if Mr. Trump is the Republican nominee.

As offensive and toxic as Mr. Trumps rhetoric is, it does not condone or justify any act of violence. But the concern that we have, again this is something the President said in his speech on Sunday night, is that the United States government and our national security officials are going to be most effective if they are able to work in partnership with the leaders of the Muslim-American community to prevent those who are most vulnerable to this radical ISIL ideology from being incited and inspired to carry out acts of violence.

So, and rhetoric like the offensive bluster that we hear from Mr. Trump, makes it much harder to build and solidify that relationship.

And yet we have the speaker of the house saying he would vote for Donald Trump. So this does not indicate that the Republican party has joined the rest of us in the 21st century.”

How’s that working for you Josh? How’s it working for your boss? It was a really noble attempt to turn the tide against Trump and in favor of your Muslim immigration policies at the same time.

Unfortunately for you, every day more and more countries, states, and people are realizing that what Trump proposed was exactly what anyone would do. He didn’t say ban all Muslims. He said he would stop immigration until the problem as solved.

This is not some bizarre, ‘disqualifying’ idea as you portend. It is the only logical idea. If every 100th visitor to your house shot one of your children, you too would stop all visitors until the problem was solved, and so would every sensible person in this country.

As the problematic Muslim immigrants are rioting, raping, and demanding more, the benevolent countries that invited them in are becoming ever more desperate to end the onslaught.

They are stopping the influx, shipping them back home, locking them out and in Germany there’s even a growing faction saying they should be shot at the border for trying to enter. That is how desperate the situation has become.

Seems the people are on to you now. They’ve figured out a simple way to vote in the best interest of our country. Watch what Obama does and do the opposite. Just think, our country would have a border, we would not have an immigrant problem, we’d be $10 Trillion less in debt, our military would be mighty, we could all afford healthcare, there would be a few million fewer guns out there and our kids would eat better at lunch.