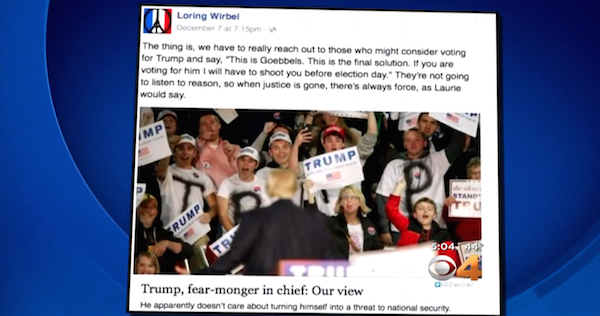 Can You Believe This Moron!

A board member for the Colorado American Civil Liberties Union has resigned after urging people to kill supporters of presidential candidate Donald Trump.

ACLU Board Member Loring Wirbel’s disgusting Facebook post called for the murder of American citizens simply because they don’t believe as he believes. The post states:

“The thing is, we have to really reach out to those who might consider voting for Trump and say, ‘This is Goebbels. This is the final solution. If you are voting for him I will have to shoot you before Election Day.’ They’re not going to listen to reason, so when justice is gone, there’s always force.’”

“It’s almost like, you will think the way we think, you will do what we want you to do, or we eliminate you?” says Steve House, chair of the Colorado Republican Party.