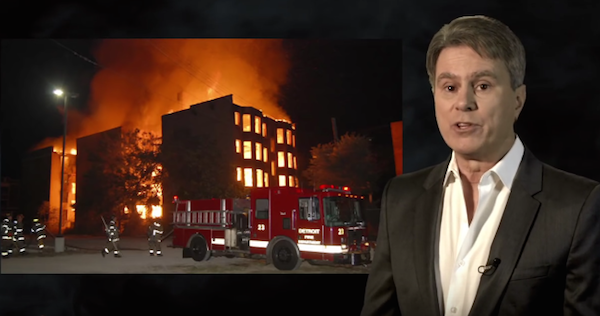 Host Bill Whittle shows us in excruciating detail what four, five, six, seven or more decades of ‘Death by Democrats’ has done to our nation’s cities.

After a review of the deterioration of Detroit’s Mark Twain Library, Bill Whittle takes us on a heart-wrenching historical tour of Detroit and so many cities like it that have suffered under long term democratic party rule.

“If you want to understand ‘The Detroit Pattern’ maybe we should start in Detroit.”

Bill Whittle explains that throughout the nineteen forties, fifties and into the sixties Detroit was not the blasted ruins you see today but the thriving pulsating center of American business enterprise.

By 1960 Detroit, yes Detroit, had the highest per capita income of any city in the United State. Factories were humming, Motown Records was spinning out blues and soul and Detroit school system, called by the New Republic one of the finest in the world, was turning out world-class students of every race.

Up until 1960 Detroit could boast a large and prosperous black middle class, black congressmen, and the wages for unskilled workers were higher than the national average. 1960 was last year that Detroit had a republican mayor.

What happened? With the first of the current democratic dynasty, white liberal Jerome Cavanaugh greatly expanded the role of city government in the city’s business and to his credit made a serious effort to appoint blacks to prominent positions in his administration. But this was just preamble.

The wave that eventually destroyed Detroit and so many other American cities came from Washington D.C. and Democratic President Lyndon Johnson’s ‘Great Society’ and ‘War On Poverty’ program.

Four hundred and ninety million dollars in federal money, that is an enormous in the mid-sixties, poured in through the model city program. It went to housing projects and social programs disbursed by City Hall, not to help small businesses and entrepreneurs keep the city economically viable. 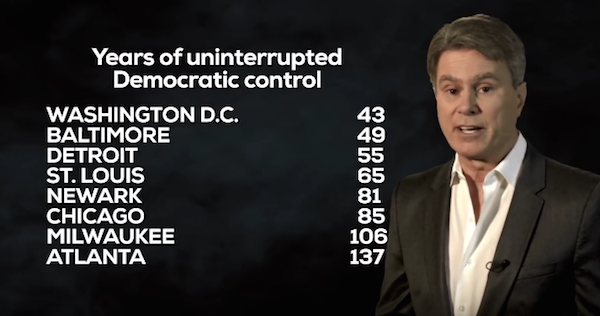 By nineteen ninety Detroit’s ‘Model City’ area had lost 63 percent of its population, 45 percent of its housing units, and became unimaginably violent and dangerous. 34% of Detroit citizens were on the welfare rolls by 1987, that’s four times what it was just twenty years earlier.
.
Sociologist Walter Williams looked out over the financial ruin of Detroit and said:
.
“The welfare state has done to black Americans what slavery couldn’t do, what Jim Crow couldn’t do, what the harshest racism couldn’t do and that is to destroy the black family.”
.
In 1976 the Democratic mayor cut the police force by 20 percent, by nineteen eighty-seven the homicide rate was three times higher than it’s been 20 years earlier. When locals complained about the skyrocketing crime the mayor openly stated that:
.
“Calls for law and order are simply code words for white racism.”
.
So where did all of the money for law enforcement go? Seems it went into the same pockets that the money for education went.
.
Today the Detroit Public School system spends $15,500 per student per year, that’s half again more than the national average. It is not that there wasn’t enough money, it’s where the money went. In 2009 forensic accountants discovered two hundred and fifty-seven ghost employees on the payroll, another five hundred people were illegally drawing millions of dollars in benefits from the public school fund. After a few months of this seven additional public officials were charged with felony embezzlement having put tens of thousands of dollars from the school system in their pockets.
.
“In 2009 Detroit’s children had math scores lower than any ever recorded in the history of the city.”
.
They now read at a level 73 percent below the national average. One-in-five fourth graders can’t read with fourth-grade proficiency.
.
Economically fifty-five years of democratic corruption in Detroit means the city now has the highest property tax rates in America and yet in 2012 city revenues were 40% lower in constant dollars than they were in 1962.
.
In terms of economic freedom, the ability to start new businesses without acres of government red tape, today Detroit ranks three hundred and forty fifth out of three hundred and eighty four regions measured. When facing this ocean of fees and regulations most people trying to start new businesses simply give up, their dreams just die.
.
But what never dies of course is the city’s vast bureaucracy with forty some individual labor unions each with high salaries and lavish retirement benefits. Their schools are the worst in the country and the murder rate is either first or second, but Detroit can proudly state that fully one-third of all of the money that it spends every single year is paid to some 21,000 public sector retirees and their families.
.
“This is what fifty-five years of death by democrats has done to Detroit.”
.
The overwhelmingly black kids keep failing in school and killing each other by the thousands and they’re overwhelmingly black mothers and fathers keep electing the overwhelmingly black liars, thieves and con artists who failed to protect them and who pocket the money for the jobs in the schools that would set them free. By continuing to elect these heartless, greedy democratic swindlers the prisoners of these cities are inflicting upon themselves the most shameful injustice to befall black America since slavery.
.
VIDEO: Bill Whittle’s New ‘DEATH BY DEMOCRAT’: The Detroitization Of America

Whittle tells us that Author John Peraza has compiled a remarkable book called The New Shame Of The Cities which contains an exhaustive, amazing and depressing army of statistics that outlined the Detroit pattern that has killed those American cities ruled by unbroken lines of Democrats and Democratic Party policy.