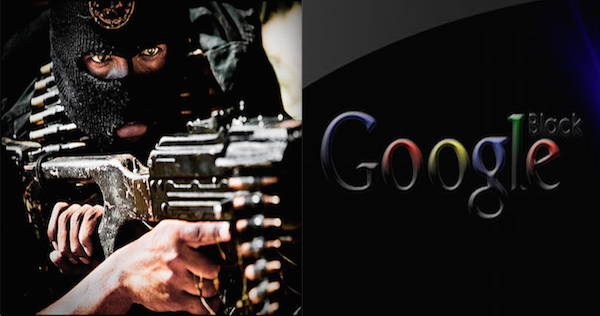 U.S. based Google is stepping up to help the world deal with the metastasizing terrorism problem that is plaguing one benevolent country after another.  The Search Engine based company out of Mountain View, California is not only taking a stand, they are taking action too.

They won’t be dropping any bombs, but they might be dropping information that is far more effective. Google’s new strategy to use its highly targeted advertising system in the war against ISIS. Last week, Anthony House, the senior manager for public policy and communications at Google, revealed plans to show users anti-radicalization links in response to terrorism-related searches.

Think about that for a moment. The bombs, rapes, stoning and beheadings are not the problem. They are all symptoms of a problem. The problem is thought, faulty thought. We can not ever stop the symptom without stopping that cause. We have a young man enraptured by the thought of serving Allah in the most egregious way. He logs onto the internet to delve deeper into his hatred when his intentions are interrupted. The intense thoughts of hate, murder, greed, whatever it is, is are interrupted by our benevolent, clever, threatening, or loving message of . . . of whatever it is we the people of the world decide to send. Google is providing the rest of the world with an inside track to the terrorist’s mind. Yes, killing them all will stop the problem, but it cannot be done. On the other hand what if this once obscure tech company could actually allow the rest of world the heretofore impossible opportunity to reach right into the home, enclave and mind of these young men and actually make a difference. I think it’s worth…a shot!

According To Fox news, the program is still in its pilot stages, but House is hopeful that this new plan may provide a clever tool that protects the freedom of the Internet while protecting the livelihoods of the world’s citizens. He went on to say:

The idea, the Internet giant says, is to provide a sort of alternative narrative to those looking for information about extremism. In a statement, a Google spokesperson further explained,

“What was referenced is a pilot Google AdWords Grants program that’s in the works right now with a handful of eligible non-profit organizations. The program enables NGOs to place counter-radicalization ads against search queries of their choosing.”

In addition to the counter-terrorism ads, Google is also ensuring that its subsidiary YouTube makes anti-extremism videos more discoverable, further aiding the overall efforts against ISIS and similar groups.

The move comes in the midst of an ongoing debate about the role and responsibility that social media groups should accept in responding to the proliferation of extremism. ISIS is known for leveraging sites like Twitter and Facebook for both recruitment and propaganda purposes, and a recent lawsuit against Twitter suggested that ISIS has only reached its current level of influence with the (albeit unintentional) help of social media platform.

And while Google ads may not be a comprehensive solution, it’s certainly a step in the right direction when it comes to using tech to fight the bad guys.