Allahu Akbar To Whoever Goes To Battle In That Tank!

During a memorial service commemorating seven Hamas militants who had been killed in the collapse of a tunnel they were digging, Hamas officials paraded a “locally-made tank” specifically designed to fight Israel. The official spokesman, Abu Obeida, then stepped down from the tank for his speech.
.
The spokesman said the new tank was built out of an Israel Defense Forces’ tank captured two years earlier. However, a number of both Palestinian and Israeli observers noticed that there was something odd about the new fighting machine which the Hamas spokesman warned would be used on the “path of Jihad.” 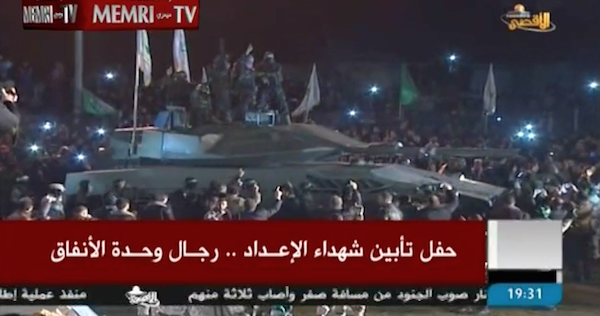 Israeli Prime Minister Benjamin Netanyahu’s spokesman Ofir Gendelman was not too worried about the new Anti-Israel weapon. He pointed out that the contraption appeared to be a mockup constructed of wood. Others suggested the gun turret was actually a sewage pipe.

Despite the embarrassing flaws with the new weaponry, some Hamas supporters took to Twitter to express their excitement at the’ latest addition to its armory. But others, who weren’t entirely clueless, used twitter to spread the rather hilarious fraud the Islamic leaders were perpetuating on their faithful followers. 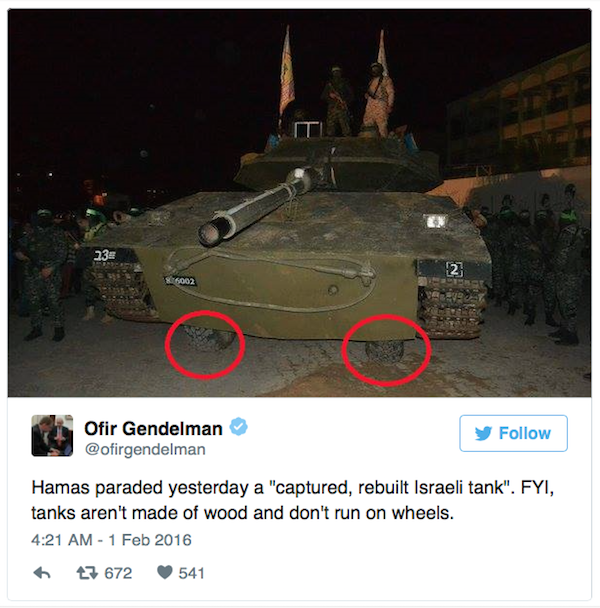 According to TheBlaze, during his speech inaugurating the tank, Hamas’ Izzedin Al-Qassam Brigades spokesman Abu Obeida warned that the Islamic movement was “preparing ourselves for the day that we shall meet those [Israeli] tanks.” He went on to say:

“Let us point our index finger toward heaven and renew our pledge of allegiance to Allah and to the commanders of the Izzedin Al-Qassam Brigades and vow to continue on the path of jihad and resistance,” he said at the ceremony.

Senior Hamas leader Ismail Haniyeh revealed that the deceased Palestinian fighters were digging tunnels into Israel and testing rockets in preparation for a new round of attacks on Israel.

VIDEO: Hamas Rolls Out Its New ‘Tank’ to Fight Israel.