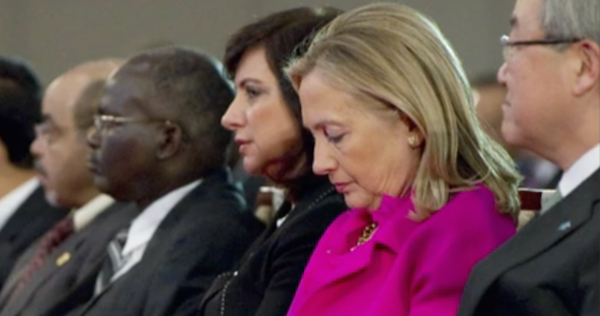 There are 55,000 emails from Hillary Clinton’s server that have been released. 2,000 of them contain information that has been classified as confidential, secret, or top secret. 104 of them she wrote herself. They came “from her brain.” She took secret information, wrote it down and potentially exposed to to whomever could hack into her unsecured server.

It’s Not Looking Good For Hillary

Senior judicial analyst Judge Andrew Napolitano explains exactly how that Clinton email scandal got started, what’s going on now, how it was effected by General Petraeus’ investigation, and how it will likely end for Mrs. Clinton.

Every time information gets out it seems to be getting worse for Mrs. Clinton.

On her first day in office she signed an oath in which she said, after two hours of FBI instruction, that she understood her obligation to know secrets when she sees them and to keep then in a secret venue. She obviously did not comply with that oath.

Now we find over the weekend that of the 55,000 email that have been released, of the 2,000 that contained confidential, top-secret or secret material, 100 of them were actually written by her. Meaning, she took secret information in her brain, put it into emails and sent it to people, some of whom had top secret clearances, some of whom didn’t, but all of whom received it via her home brewed server which was not a secure server and on which it was a criminal act to pass secret information through.”

“It All Seems To be Coming To A Head Very Soon.”

The evidence of her failure to safeguard state secrets is well documented, publicly known and quite frankly, overwhelming. It is almost inconceivable that she won’t be charged with something.”

Judge Napolitano then goes on to explain how they will go about charging her, “because of who she is.” He is then asked what bearing what happened to David Petraeus, Former Director of the Central Intelligence Agency, will have on Mrs. Clinton’s case?

Tremendous bearing in two respects, one is, what David Petraeus pleaded guilty to doing is a tiny, tiny fraction of 1% of the volume that Mrs. Clinton is alledged to have done. In David Petraeus case the alleged secrets were allegedly given to a friend who also had a security clearance. There was no question about whether or not they were exposed to friend or foe in a non-secure venue.

In Mrs. Clinton case it is many, many times that volume and it probably was exposed to friend or foe, anybody who could hack in.

Here’s the ‘below the radar thing.

So I honestly think that the way the prosecutors handled the Petraeus case will work to the detriment of Mrs. Clinton.”