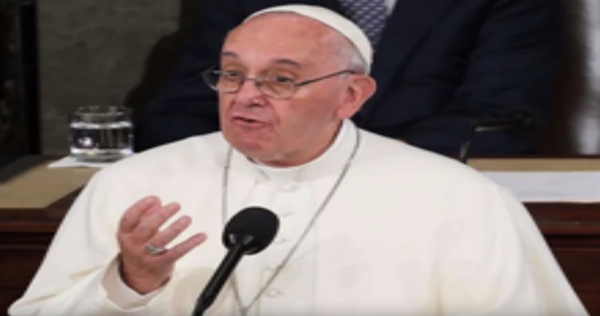 While speaking to a group of French Christians this week, Pope Francis referred to the current “Arab Invasion” that is underway and compared it to previous influxes of people that have enhanced Europe.

The pontiff noted that there have been many invasions of Europe of the course of many centuries of history.

The Vatican newspaper, L’Osservatore Romano, noted the Roman Catholic leader as saying, “Today we can talk about an Arab invasion. It is a social fact.”

The newspaper reported the pope reminded those in attendance that Europe is the “only continent that can bring about a certain unity to the world and that it had always been able to “go forward and find itself enhanced by the exchange among cultures.”

He believes the current migrant crisis will help make Europe more multi-cultural in the future.

The European Commission reported that the number of Syrians seeking asylum doubled to 362,800 last year and the number of Iraqis increased to 121,500 for a total of 484,300 refugees from the two war torn countries.

Germany, which received over 1.1 million migrants last year, has been joined by several other European Union member states to back mandatory migrant quotas for the EU members. There is opposition to the German proposal from former communist eastern European countries.

These nations had offered a path by which migrants made their way to northern European countries, especially those offering comfortable socialist welfare support. With those nations closing their borders, the refugees have nowhere to go and are collecting in Greece and Macedonia, putting pressure on their facilities to cope with the increasing mass of asylum seekers coming from Arab and North African nations.