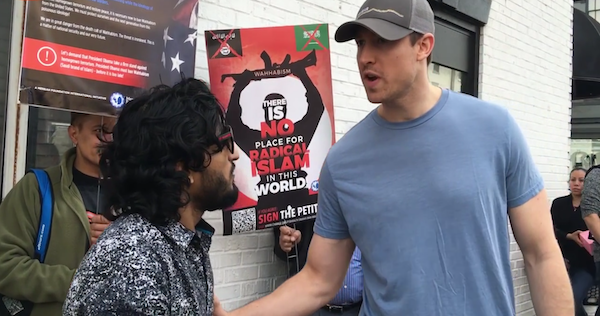 Watch his reaction when a brave American steps in and puts him in his place.

A Saudi Wahhabi shows up at an anti-ISIS rally in Washington DC and starts screaming obscenities, abusing the campaigners and calling them Iranian, when none of them are from Iran or promoting Iran.

MFI was campaigning against the ideology behind ISIS and the Taliban in Georgetown, Washington D.C. when a Saudi Wahhabi decided to disrupt the peace.

“This is the sort of extremism and intolerance we are campaigning against.”

This went on and on until a big American gentleman steps in and puts him in his place. “Walk” he tells him as he points away, “Walk!” The Saudi balks at first, but when the gentle giant looks him in the eye and tells him, “I Mean It.” He shuts his mouth and disappears.