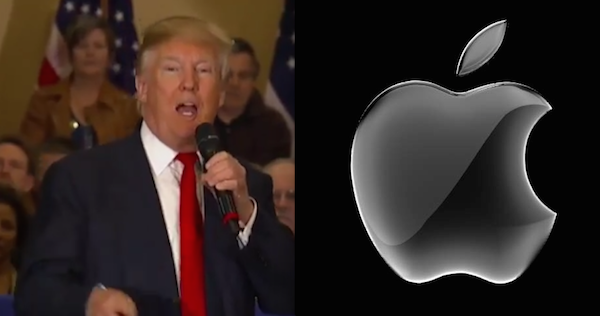 Pawley’s Island, South Carolina — Donald Trump tears into Apple President Tim Cook and calls for a boycott on Apple Computer products until they helps the FBI break into the iPhone of one of the San Bernardino shooters.

At the rally in South Carolina, Donald Trump had an idea. Right in the middle of an answer he changed tracks and called for a boycott of Apple because of they’re refusal to unlock the San Bernardino killer’s iPhone for the FBI.

As Trump was discussing China’s theft of our jobs, he repeated that Apple’s in the wrong, saying:

“Apple ought to give the security for that phone, Ok. What I think you ought to do is boycott Apple until such a time as they give that security number. How do you like that? I just thought of it. Boycott Apple,” Trump said.

“The phone’s not even owned by this young thug that killed all these people. The phone’s owned by the government, Ok, it’s not even his phone,” Trump said. “But Tim Cook is looking to do a big number, probably to show how liberal he is. But Apple should give up, they should get the security or find other people.”

“The government requires Apple’s assistance to access the device to determine, among other things, who Farook and Malik may have communicated with to plan and carry out the IRC shootings. They may also discover where they may have traveled to and from before and after the incident, and other pertinent information that would provide more information about involvement in the deadly shooting,” prosecutors said in their initial filing on Tuesday.

Trump supported the prosecutors position when he tweeted: I use both iPhone & Samsung. If Apple doesn’t give info to authorities on the terrorists I’ll only be using Samsung until they give info. — Donald J. Trump (@realDonaldTrump)

Shortly thereafter, he tweeted, “Boycott all Apple products until such time as Apple gives cellphone info to authorities regarding radical Islamic terrorist couple from Cal.”

Trump’s comments came days after Cook said in a letter that his company would oppose a federal judge’s order to provide the FBI with security software to break into one of the San Bernardino terrorist’s iPhone. In his letter Cook argued that complying with the judge’s order would build “a backdoor to the iPhone,” which Cook said he considers “too dangerous to create.”

VIDEO: Trump Calls For Apple Boycott: “It’s Not Even His iPhone!”