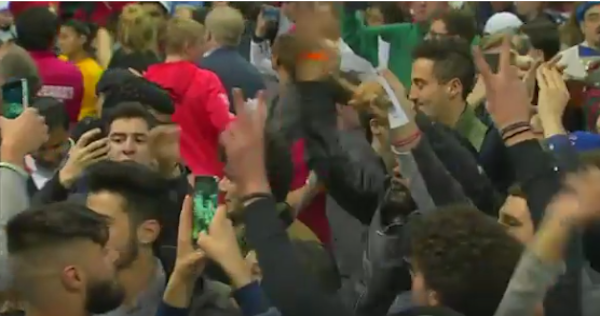 Republican presidential candidate Donald Trump has cancelled a rally in Chicago, calling off the event due to safety concerns after protesters packed into the arena where it was to take place.

CHICAGO – Republican presidential candidate Donald Trump canceled his Chicago rally on Friday, saying he didn’t want to see “people get hurt” after protesters packed into the Chicago arena where the rally was to take place.

According to Foxnews, the announcement that billionaire businessman Donald Trump would postpone his Chicago rally fired up some of the crowd inside the University of Illinois at Chicago Pavilion who broke out into cheers. Meanwhile, Trump supporters began chanting “We want Trump! We want Trump!”

There were isolated physical confrontations between some members of the crowd after the event was canceled. Police escorted protesters off the stage, monitored volatile outbreaks and kept violence to a minimum.

Speaking with Fox News’ Greta Van Susteren, Trump said he had arrived in Chicago two hours earlier and about 25,000 people were trying to enter the arena. After meeting with law enforcement authorities, he said, “I didn’t want to see people get hurt (so) I decided to postpone the rally.”

“What we did was intelligent,” Trump said. “A very good decision…a wise decision.”

He also told Van Susteren, “if we had the rally, I think it would not have been a good situation.” But, he added, “Our First Amendment rights have been violated.”