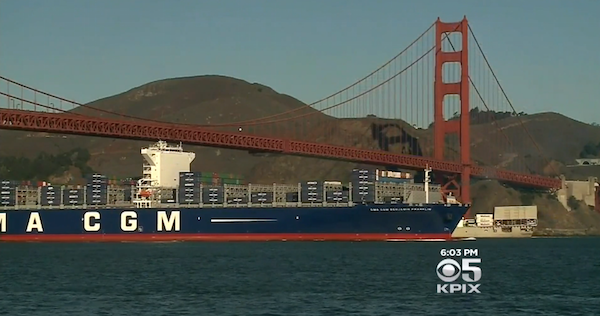 People just stopped and stared as they realized just how big the Benjamin Franklin really was!

CMA CGM Benjamin Franklin is an Explorer class container-ship built for the French company CMA CGM. Delivered in November 2015. she is one of the largest container cargo vessels ever built, capable of carrying 18,000 containers, which if lined up end-to-end would stretch for 58 miles.

The arrival at the Port of Los Angeles marks the first time a ship of this size has been used in North America. The second stop was San Francisco where the Benjamin Franklin, the tallest container ship to ever enter the Port, barely squeezed under the Golden Gate Bridge.

The Benjamin Franklin is about a third larger than the biggest container ships that currently visit the deep water ports of southern California. At just over 398 meters (435 yards) long, it’s one of the biggest vessels in the world. It’s also the biggest container ship ever to dock in a U.S. port. With an 80,000 horsepower engine the ship weighs in at 240,000 tons, that’s 480,000,000 pounds. Standing on its end, it would dwarf the Eiffel Tower.

When considering port infrastructure, Marc Bourdon, president of CMA CGM American operations, states that while some ports are ready, most ports would have difficulty with such a large ship, and that ports would need to be modified before permanent large-scale implementation could commence. One such necessary modification is for the terminal cranes to be able to reach containers stacked to the full capacity of 10 high. The port in Los Angeles had been modified to accommodate the Benjamin Franklin ahead of its arrival.

According to CNN, the infrastructure  of the U.S. port is still not ready to bring in the colossal ship if it’s fully loaded. That means the floating behemoth will only be able to fill up to about three-quarters of its capacity as it stops at ports like Hong Kong along the journey. 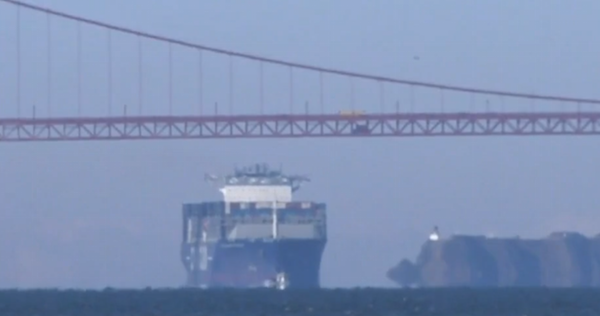 “This is a test,” Renou says. “We want to show our commitment to the U.S. route and hope that there is an understanding, that America needs this kind of ship.”

The move toward bigger ships is an industry trend that has already taken hold in Asia and Europe. Making a huge investment in these giant ships may seem like a risky strategy for an industry suffering the effects of weakening global economic growth, but industry experts say buying big actually saves money in the longer term because the increase in size, and potential profit, far exceeds the relatively incremental increase in overhead. As an example, staffing on board usually only increases by a few crew members for a ship that’s twice as big as a smaller vessel. 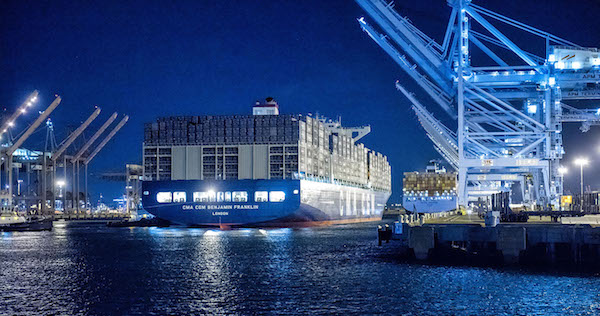 “The larger the ship you have, the more containers you can carry,” says Velibor Krpan, the captain of the Benjamin Franklin. “It’s cheaper to have bigger ships, containing more products, because you have fewer things to pay for. It’s more efficient in every aspect.”

Right now, as global demand slows, moves to expand are helping to fuel a capacity glut. “Currently in the container shipping industry, there is overcapacity of vessels,” Krpan says. “Many of these vessels around the world, they are laid up, they are waiting for cargo.”

VIDEO: The Biggest Container Ship Ever In The U.S.