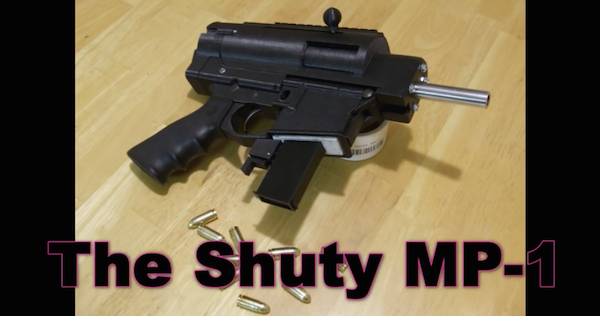 Over 800 rounds fired with “No Problem!” The 9mm MP-1 is very accurate up to 50 yards. The redfield accelerator sight makes it even more deadly!

“No one had ever tried to get a semi-automatic 3D printed gun working before…I’m just one of those types, I like to find new things that people say can’t be done,” Derwood tells Wired. “It’s simple, but it works. The gun shoots great.”

I have already fired over 800 rounds through the Shuty MP-1. You can safely fire two mags through the gun without any damage. Its just a good idea to let it cool before firing more.

Derwood describes his creation as a “mostly” 3D-printed firearm with about 95 percent of the construction done through printed parts. The resulting product (seen in the video below) is completely void of a serial number, impossible to trace back to Derwood, and entirely legal — which is perhaps its most controversial feature. 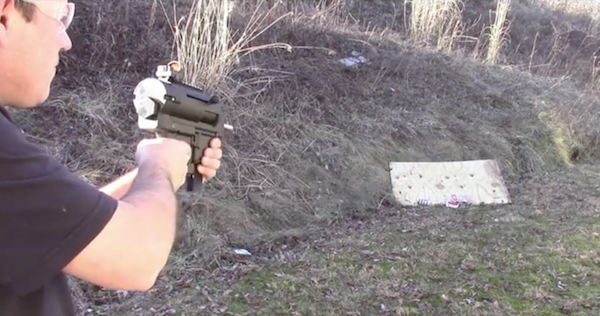 Though Derwood’s 3D-printed automatic weapon (named the Shuty-MP1) isn’t the first of its kind to make waves, he does claim he’s the first to combine 3D-printed parts with store-bought components. With 95 percent of the weapon coming by way of his 3D printer. The West Virginia native chose to use a real Glock barrel along with a metal hammer, firing pins, bolts, and springs to complete its construction. Although the gun boasts elements of a store-bought gun, the fact each component is merely an accessory (meaning they require an actual gun for use) allows the finished product to remain legal.

Derwood’s decision to build home-made semi-automatic guns comes from a desire to challenge his engineering skills — aside from manufacturing it to serve as a big middle finger to those pushing gun control laws. Because of this, he in no way intends to share his plans online (something which the State Department has recently begun cracking down on) and further points out that criminals shouldn’t even be interested in his creation. Why? After successively firing roughly 18 rounds, the printed part surrounding the gun’s barrel starts to melt and change its shape unless the shooter allows it to cool.

“If you keep shooting, it’s going to fail,” he continues. ” That makes it not such a desired weapon for a criminal.” 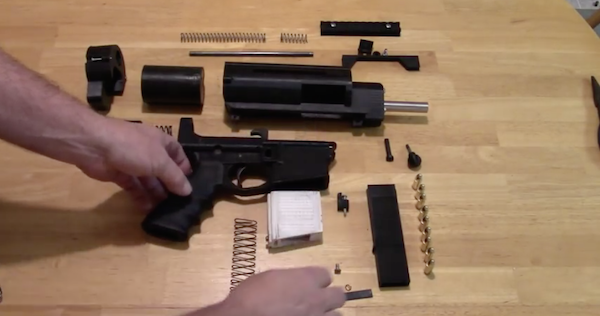 Although Derwood feels it’s not an ideal weapon of choice for a criminal, 18 consecutive rounds could still do some damage. In the video below Derwood displays the gun’s firing power, shooting eight 9mm rounds towards three soda cans sitting next to a piece of plywood. If you watch the video thinking he was using a real, traditionally constructed gun, you’d have no idea that most of the thing came off a 3D printer. That’s impressive . . . and alarming!